“They’re coming. The angels are coming for you.”

The Weeping Angels have a lot of potential in your own adventures. They’ve only appear in two stories (three episodes in total) but are instantly recognisable and any player would be rightfully apprehensive about facing them.

Their limited screen time means that there are lots of ways to use them that haven’t been seen yet, avoiding the feeling that you’re simply re-treading a televised story. They have a clear focus and modus operandi. The mystery of how they get about allows you to justify them being in any setting.

Their gothic statue forms make them perfect for haunted locations. Wester Drumlins was an example of a haunted house but the Weeping Angels would be equally at home in an ancient castle, the grounds of an abandoned church or among the ruins of an ancient temple.

Much of what they do would lead player characters to initially think they are dealing with ghosts. The Weeping Angels move so quickly that doors that open, close and even lock on their own would seem to have a supernatural cause, as would mysterious footsteps and people vanishing.

The key would be to mention the statues without drawing to much attention to them. Angels covering their faces are sure to ring alarm bells unless they are in an area where they fit in such as a tomb, graveyard or among other piece of mournful, religious ladened pieces of art.

You could create a community for the blind or have the Weeping Angels set up in an old folks home, eliminating those old folks who can see so that they can hide among the blind residents.

If you want to give the Weeping Angels a greater degree of intelligence they could engineer a virus that robs people of their sight. They could use their previously unseen technology or simply gain access to a biological lab to create the virus. They could also take advantage of passing comet that blinds those who see it, a scenario which played out in ‘The Day of the Triffids’.

This would be even more scary for the player characters if they were blinded. It would be difficult enough for them to navigate without sight but coupled with the knowledge that the Weeping Angels were nearby and there was nothing to stop their approach the whole scenario would be a nightmare.

If their prey have their sight the next best thing for the Weeping Angels would be to get people into a situation where they can’t see due to the lack of illumination.  A group of Weeping Angels could hunt in the tunnels of a mine, sabotaging equipment so they can ambush people in the dark.

Recently there have been several stories of miner being trapped in cave-ins, forced to spend weeks awaiting rescue. In the case of the Brazilian miners modern technology allowed a camera to provide communication between those above and below the ground.

Imagine a scenario in which a group of miner gave frantic reports of monsters, trapped with them in the tunnels that was dwindling their numbers. When all communication is lost it would be up to the player characters to go down and save those who were left.

Underground locations aren’t that hard to come by either. The London underground would make an equally good hunting ground if the Weeping Angels used their powers to cause the lights to fail. They’d have their pick of people on the stations or they could even bring a whole train to a stop and work their way through the carriages.

Of course any building can work for the Weeping Angels. At night if a building suffers a power cut any room that doesn’t have a window will be pitch black. If the Weeping Angels are on a high enough floor the lack of power will prevent people from using the lifts to escape and they need only lock the doors to the stairwells.

This could be used to take the player characters by surprise. They could think they’re just attending an art display, mixing with the artists and wealthy buyers when the power goes out and the statues on display reveal their true nature.

‘Time of Angels’ showed that they are just as effective in a futuristic setting and there is no reason they wouldn’t work even better in a historical era. In fact, an earlier era gives them more statures to blend in with and primitive means of illumination, such as torches, oil lanterns and candles, are easier to eliminate and less effective than modern technology.

An adventure set at the height of Christianity’s influence would find the player characters struggling to convince people that the stone statues of angels were the ones behind the disappearances that were plaguing a community. They might even find their lives put in danger for uttering such blasphemous accusations.

All they need do is wait for a brave hero to arrive to deal with the monster. When he closes his eyes or averts his gaze to prevent himself being turned to stone the Weeping Angels would be free to attack him. They only have to hope that he isn’t using a mirrored shield.

The player characters could become involved in this hunt, interested to see if their is a historical basis for the legend. Even they might take the stone ‘victims’ at face value and only realise what they really are when it is far too late.

Futuristic and alien settings allow you to explore how technology and other cultures deal with the Weeping Angels. On worlds and space stations where the inhabitants are all cybernetic their would be no living minds to perceive the Weeping Angels who would have nothing to feed on.

Such a place might present itself as being completely benign, welcoming organic visitors. When the Weeping Angels start to feed hungrily the disappearances could be blamed on the natives who have no idea what is happening. The player characters could end up having to find the true culprits before a conflict occurs.

This could have interesting consequences depending on how far into the past and what distance those exiled by the Weeping Angels are sent. Do visitors to a planet get sent into the past of their own world or the alien world they’ve arrived on? 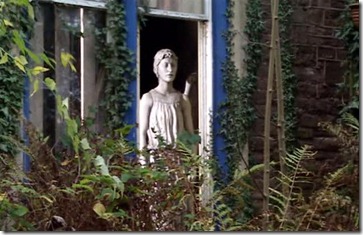 This could lead to an interesting situation where Earth explorers make contact with an alien world only to find out that the species have meet humans hundreds of years before. Depending on the technology of the setting they might not have been able to communicate with the locals and explain how they’d suddenly appeared in their midst.

On a space station or within a moon base those sent into the past would meet a quick death. This too would have consequences. Imagine if in ‘2001’ they hadn’t found the monolith on the moon but human bones, all the victims of a Weeping Angel.

Even if you don’t use the Weeping Angels directly they create interesting adventure seeds in the form of their unwilling time travelling victims. A whole campaign could be built around player characters that actively use their TARDIS to find these people and rescue them both to save their lives and protect time.

They could also lend colour to any historical game. They might simply run into someone who has knowledge of the future and when pressed for details reveals how the Weeping Angels sent them back in time and how they’ve had to adapt to the period they’ve found themselves in.

All of which shows that the Weeping Angels have a lot of potential, both for your games and the television series. Let us hope that they’ll return soon to give us further nightmares.

This entry was posted in 10th Doctor, Blink. Bookmark the permalink.

2 Responses to “They’re coming. The angels are coming for you.”