“Save Danny. Bring him back or I swear you will never step inside your TARDIS again.” 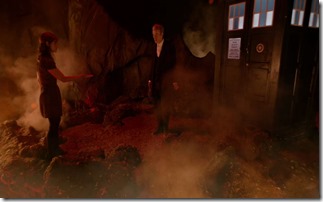 What happens when a companion goes bad? In ‘Dark Water’ Clara is grief stricken when Danny dies. She refuses to cry and comes up with a coldly calculated plan. She tricks the Doctor into taking her to a volcano, gathers up his 7 TARDIS keys, drugs him and threatens to throw all the keys in the lava unless he agrees to her demands.

While the scenario that plays out is just a hypnotic suggestion it is clear that Clara would go through with her threat, throwing all the keys into lava. In her mind she has denied the Doctor the use of his time machine forever. Not only that but given their proximity to the volcano and the likelihood they are on an alien world she has probably just sentenced them to death.

Is there much difference to her tactic than that of Melody in ‘Let’s Kill Hitler’?  At least Melody was more honest about her intentions, pointing a gun at the Doctor and making him choose between death and changing history.

It could be argued that Clara is acting out of character due to her grief and that she knows the Doctor can change time. She knows that he wouldn’t agree and so has taken steps to ensure his co-operation.

The problem is that this behaviour stems directly from her nature as a control-freak. She demands that others obey her no matter the consequences. That is who she is and no matter the circumstances this is how she behaves.

Clara explicitly states that she doesn’t give a damn about paradoxes. ‘The Angels Take Manhattan’ makes it clear that a paradox is not just confusing but potentially devastating to the surrounding area. Innocent people would be harmed or killed if the Doctor was to agree to change history and Clara doesn’t care.

At this point Clara’s selfishness is putting others in danger. At this point she is a villain who wants to achieve her goal no matter the cost. She is exactly the type of person that the Doctor normally opposes.

The Doctor forgives this behaviour, even though he calls it a betrayal. He says that he cares too much about her for that to make a difference. The problem is that the Doctor has much wider responsibilities than to his friend.

As one of the last Time Lords (at least while the others are trapped) he is the only one who can protect time. He also has responsibility to prevent his time machine from doing harm to the web of time. At this point Clara has revealed herself to be a liability.

If he had agreed to her demand to prevent the accident what would have happened? It is possible that this would result in the same scenario as ‘Father’s Day’. Their earlier selves would have been erased and Reapers would have started devouring everything until Danny died. Alternatively the dire warnings of ‘The Angels Take Manhattan’ would occur and the paradox would destroy part of London.

PCs could become involved if either event occurred. In investigating the cause they could find it is due to the Doctor agreeing to Clara’s demands. They might have to go back earlier to warn the Doctor or give him the idea to search for the afterlife instead.

Characters might find out that they are responsible for abusing time travel in the future. Could a Time Lord PC allow a companion to remain with him if they knew that they’d threaten to kill them or take an action that would damage time? How would the companion reacting knowing what they’ll do.

‘The Day Of The Doctor’ indicates that the Doctor’s companions are interviewed. Clara apparently passed this screening process but should she have? Shouldn’t a psych evaluation have predicated this disturbing behaviour if she suffered an emotional loss? Would the Doctor reveal how close he came to dying due to his companion betraying him?

A UNIT campaign could focus on these psych examinations, both for established and new companions of the Doctor. What if the PCs detect some worrying personality traits in a companion? Can they persuade the Doctor to reject the companion?

This would be a tragic way for a heroic Time Lord to die. After facing off against so many mad men and monsters it is their own friend who ends up killing them, just because they don’t get their own way.

An adventure could explore a diverging timeline in which the scene by the volcano is not an hallucination. What if the Doctor died leaving a grieving Clara behind? What if the PCs either stumbled across her or received a distress call (maybe using the external phone of the TARDIS to contact them)?

How would the PCs react to Clara and what she has done? What would the universe now be like without the Doctor? What would Missy do now she doesn’t have anyone to give her Cyberman army to?

Eventually the PCs could put history back on track, maybe merging Clara with her past self. This could be part of the reason that Clara decides to part ways with the Doctor. Maybe part of her remembers just how close she came to killing him.

This entry was posted in 12th Doctor, dark water. Bookmark the permalink.