“You Never Answer Your Phone.” 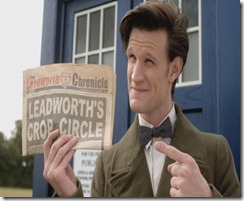 I’ve discussed before the idea of the Doctor being on call here but we also know that the Doctor can be very difficult to get hold of, even if you have his phone number. River Song has to graffiti the oldest cliff face in the universe to get is attention and the Ponds have to write his name in a corn field.

So just why is this?

After all the Doctor, for the most part, seems eager to fill his time. We have frequently seen him respond to distress calls and even investigating mysterious messages that appear on the psychic paper. Why then does he ignore certain calls?

In the case of the Ponds the Doctor is in the process of tracking down the baby Melody, knowing that she will become River. He isn’t having much luck and is reluctant to face Amy and Rory until he has good news.

What then is the reason for him not to answer River Song’s phone call? At that point he’d recently seen her during the events of the fall of the Byzantium and knew that he’d met her again at the Pandorica, something he considered to be a fairy tale. She is trying to call him to tell him about Vincent Van Gogh’s painting of the TARDIS that reveals the location of the Pandorica.

The answer could be that the Doctor is still reluctant to deal with River Song. He know he doesn’t have the advantage when she is around and has already embarrassed him in front of Amy. He also knows that she’ll is responsible for killing a good man, which he might suspect might be him.

His reluctance could also be connected to the Pandorica. He knows that when he next meets River Song it’ll involve this legend that can’t be real. For the Doctor the nature of the Pandorica is an unknown, so might not be ready to face it.

The ‘Let’s Kill Hitler’ prequel shows the Doctor listening to the message from Amy. It is probable that he didn’t listen to a message from River Song, since he has no idea what she wants to see him about.

For a time traveller listening to a phone call has important ramifications. The contents of the message become a fixed point, where as if he ignores it he doesn’t know what is involved and the facts are still in flux.

This has an impact on whether the Doctor answers the phone. By delaying listening to River Song’s message there is still the possibility for him to get involved at a later date. In contrast his phone call in ‘The Wedding of River Song’ with the Brigadier’s nurse establishes his death and the fact that he never came to visit, closing the door on that eventuality.

In your own campaigns a ringing phone offers an important decision for the PCs. If they answer it they may learn something important or receive a call for help but it also establishes facts they can’t alter. If they don’t answer they risk missing vital information but prevent events being set in stone.

There is also the possibility that the Doctor misses a phone call because he is busy in another adventure and might not even be in the TARDIS. This can be a good cliff hanger for PCs returning to their TARDIS only to find there was a missed call. Who was it and what did they want? If they have an answer machine dare they listen to it?

In both ‘The Pandorica Opens‘ and ‘Let’s Kill Hitler’ the Doctor faces the consequences of ignoring phone calls. He is at least partially responsible for the vandalism to time by forcing those who need him to go to great lengths to get his attention.

This can be an adventure in itself, with the PCs responding to some anomaly only to find out it was someone who they’ve been avoiding. How will they react and can they explain why they’ve been ignoring their call.

You could also explore what happens when the Doctor ignores a call and he is now too late to help his friends. What if someone died just because he wouldn’t pick up the phone? Could he forgive himself?

If the Doctor is an NPC in your campaign he might bestow the PCs with his phone number, should they need him. His behaviour discussed above gives you a perfect explanation for why he doesn’t respond when they call him. This can make things awkward when they meet him again.

The Doctor can be distant and isolate himself. We don’t know how long he lived alone between ‘The Angels Take Manhattan’ and ‘The Snowmen’ but we can safely assume he wasn’t answering his phone then.

This can add much needed mystery to the Doctor. The PCs could find that he isn’t reachable for extended periods. This can be effective when they don’t have their own time machine, for example in a UNIT or Torchwood campaign.

If there is no response when they phone the Doctor does it mean that he is ignoring their call, occupied, dead, in semi-retirement or about to appear at some later point because he got the co-ordinates wrong.

This can not only force the PCs to deal with a situation themselves but introducing growing dread into a campaign, at least until they can get in contact with him again. The Doctor’s apparent death in ‘The Wedding of River Song’ and the discovery of Trenazalore in ‘The Name of The Doctor’ could make it look increasingly likely that the PCs will never hear from him again.

If the PCs do get an answer they might be surprised when the man on the other side of the phone has a very different voice.