“The destiny trap. You can’t change history if you’re part of it.” 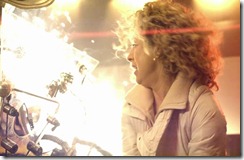 A standard time travel trope is that by attempting to change an event you cause it to happen. This is also known as a pre-destination paradox, since the event wouldn’t have happened if you didn’t time travel how could it have happened for you to want to travel back and change it?

The Doctor calls it the destiny trap in ‘The Time Of The Doctor’ where we learn that the Kovarian chapter attempted to kill the Doctor before he came to Trenzalore. The Doctor believes that this is how it always happened and so the chapter only ended up fulfilling their role.

As discussed in my article here time can be rewritten. If the Doctor isn’t at the centre of the change it could be that he wouldn’t be aware of the alterations. The Kovarian chapter might have succeeded in changing history, it just didn’t change the end result.

Their major contribution would appear to be the creation of  the cracks in time that allowed the Time Lords to send their signal. ‘The End Of Time’ showed that another group of time locked Time Lords were able to send a signal into normal space-time. There is no reason to believe that the cracks are the only way to communicate, just the most convenient.

No matter what planet the signal was transmitted from (or through) the result would be the same. The Papal Church would still arrive first, the Doctor would investigate and the same stand off would be achieved. Everything is exactly in place for the Kovarian chapter to go and change things.

In my last article I noted that their plan to blow up the TARDIS probably required the Doctor to be inside. In one version of events this could have happened but as the shockwave of destroyed TARDIS created the cracks it provided a warning and resulted in the Doctor instead being placed in the Pandorica.

The Doctor suggests that without River Song he’d have died before reaching Trenzalore, indicating that this is another thing that the chapter did to create the very thing they were trying to change.

Tasha Lem say that the Kovarian chapter engineered River Song but it is important to note that they didn’t create her. Without their influence Melody Song could still have been conceived within the TARDIS but stayed with her parents (possibly changing her name since the inspiration, Mel herself, didn’t go to school with them).

In all the adventures in which River Song saved his life (most notably in ‘Forest of the Dead’) it was she that summoned him. Without River there are no incidences in which her absence would result in his death.

It is possible that River Song was an important part in the Doctor’s life without the influence of the Kovarian chapter. Their relationship could have been much the same, even going as far as becoming his wife. It isn’t hard to imagine that the Doctor could feel responsible for her, helped the Ponds raise her and eventually take the closest thing to a Time Lord he has out into the universe to act as his companion.

It could be that chapter captured River Song and turned her into a weapon specifically because in the original record of events she was so special and close to him. Who better to become an assassin? The tragedy would be that the Doctor is still unaware of what he has lost.

All of this is to illustrate that we can’t take for granted that this was pre-destination. Time could have been rewritten and the Doctor (along with everyone else) just no longer remembers what happened originally.

This can be how you deal with pre-destination in your games. It could be very possible to alter history, just that no one remembers it. From the perspective of those in the revised timeline the time travellers only managed to cause the events that were always destined to happen. The time travellers might also have their memories altered so they now believe they were trying to change those events.

Do the PCs preserve the history that they remember or do they change things back?

As mentioned in the previous article if the universe is sentient and capable of self-repair then pre-destination could just be healing mechanism, ensuring that everything makes sense.

For example the Doctor says that you can’t change history if you’re part of it. He could mean that if history records your actions in it then the consequences of your actions have already been played out. It was foolish to try to stop the Doctor from reaching Trenzalore because they chapter already knew he was there.

Yet we know that after ‘The Wedding of River Song’ the Doctor launched a campaign to remove all mention of himself, even going as far as using memory deleting technology acquired from the Silence. Along with those records might have been any mention of the Kovarian chapter.

The reason that the chapter didn’t know they were part of history is because the Doctor deleted those records. He himself became part of destiny, ensuring that those events would occur because the time travellers didn’t know they’d already carried out their plan and failed.

If they’d known they might not have tried which would mean there no longer would be records of their activities so in the newly revised timeline where they didn’t they now do. This endless revision was only avoided because the Doctor deleted the records.

This could the universes influence, tying everything up. This gives the GM the excuse to make sure any loose story threads are tied up, as coincidence and circumstance ensure everything works out.

This entry was posted in 11th Doctor, Time Of The Doctor. Bookmark the permalink.

1 Response to “The destiny trap. You can’t change history if you’re part of it.”