“I may have the body of a weak and feeble woman but at the time so did the Zygon.” 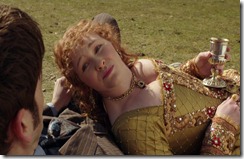 After much foreshadowing ‘The Day Of The Doctor’ reveals the circumstances in which the Doctor marries Queen Elizabeth. She is not merely shop dressing for the historical period but an important character who is key to the Doctor’s success.

Queen Elizabeth has all the important characteristics of a good companion. Not only is she important in history but she establishes a new addition to the Doctor Who mythos, the Under Gallery.

As such she is a character who is worth revisiting in your own campaigns. While we may only have a single episode that centres on her there is a wealth of historical information that can serve as source material.

Firstly, for those wishing to run an adventure with the 10th Doctor, you can depict the events that led up to ‘The Day Of The Doctor’. The commonly accepted belief is that these events take place between ‘The Waters of Mars’ and ‘The End of Time’.

At the end of ‘The Waters of Mars’ the 10th Doctor accepts that he has lived too long and that his regeneration is coming soon. Nonetheless he delays his summons to the Ood, in which time he meets and marries Queen Elizabeth.

If he knew that the end was approaching the Doctor would realises that he has to meet Queen Elizabeth in this form for her to gain a grudge against him, which he witnessed in ‘The Shakespeare Code’. Failure to do so would change his own history. As such he’d have to make sure to travel to her era before he regenerated.

Of course he might have tried to avoid that as well, with the TARDIS bringing him there at random. Once he realised that this closed up a loose end of his current incarnation he might have eventually accepted his fate.

When we join the adventure the Doctor is already aware of the Zygon’s presence and has constructed a machine to detect them. He believes that Elizabeth has been replaced and is attempting to trick her into revealing her true identity by proposing.

There is room for an adventure showing how the Doctor learnt about the Zygons. He might have met some of them elsewhere before travelling to England or he might have found evidence of them there already (maybe their ship).

Did he believe that Elizabeth was acting out of character? Throughout this story he constantly refers to ‘his Elizabeth’, pointing out flaws in the supposed Zygon’s portrayal of her. This suggests some experience with the real person, although the Doctor shows that he isn’t as familiar with her as he thought.

From this we can take it either the Doctor encountered Elizabeth prior to the adventure involving the Zygons or that during his investigation he spent some time with her and at some point believed that she had been replaced.

It is clear that Elizabeth already is besotted with the Doctor, for her to readily accept his proposal of marriage. What did the Doctor do to impress her so?

Why does the Doctor take Elizabeth into the TARDIS when he believes her to be a Zygon? It could be that he wanted to gauge her reaction, much as he does during the picnic. In which case he might have been puzzled that her reaction seemed genuine.

We might even take this an opportunity for the Doctor and Elizabeth to go on an adventure in the TARDIS. This would be interesting as the Doctor would looking for her to give herself away. An extended period experiencing the world of the Doctor might explain why she takes the events of this story in her stride. Note that she doesn’t express confusion at the reference to aliens from outer space but more at the accusation that she is Zygon.

Elizabeth shows herself to be quick witted, able to hold her own against her double both verbally and physically. Whichever the real Elizabeth is in the scene in the woods she is able to argue her case and put herself in the mind of the shape shifter, suggesting ways in which it might behave.

Armed with a gold dagger strapped to her thigh she is able to kill the Zygon. Not only that she is able to assume his place, discovering the aliens plan without the Doctor and engineering his escape (although he fails to notice that she left the door of the prison cell open for him).

One of the positive remarks that the Doctor makes about the ‘real’ Elizabeth is that she is clever. This is certainly demonstrated here. She is actually a step ahead of the Doctor. This would make her a good addition to any adventure.

She is very forgiving of the Doctor, who makes less than flattering comments about her body odour, breath, realism of her hair and the spacing of her eyes. Before the Doctor departs she insists that he keeps his word and marries her.

Is this purely for love or did Elizabeth see the benefits of seeking an alliance with such a powerful being? Now she is aware of the threats to her country, not just from other countries but other planets, the Doctor might seem like the only one who could protect her kingdom.

When the Doctor leaves he promises that he will be right back. We don’t yet know whether that is the case but we might assume that her devotion to him is why Elizabeth never married and eventually back angry enough with him to try and kill him once he returned.

Whatever she might have later felt about him she never undid her creation of the Under Gallery or destroyed the sealed message for him. It could be that she still felt enough affection for him to play her part in this grand scheme (preserving history rather than just destroying the paintings) or it could be that she understood that they were necessary to protect the country.

The 11th Doctor doesn’t remember the events of ‘The Day Of The Doctor’ so did the 10th Doctor once he left the gallery? It could be that he doesn’t, just as the War Doctor and subsequent Doctors forgot they saved Gallifrey.

This could be the reason that the Doctor never returned to Queen Elizabeth. He might have a vague memory, allowing to boast about his encounter with her when he met the Ood, but be unwilling to delve further.

If he does remember it is possible that he returned at least once more as it is suggested on more than one occasion that he slept with her. Just why the 10th Doctor would do this remains to be seen.

You may or may not want to base an adventure around this.

This entry was posted in 11th Doctor, day of the doctor. Bookmark the permalink.