“It’s from your past. Possibly your future, I always get those two mixed up.” 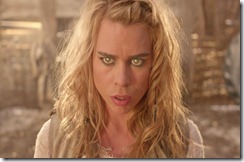 The interface in ‘The Day Of The Doctor’ is able to access information from the Doctor’s mind. It mistakenly assumes a form from his future instead of his past. While it displays the ability to open time portals this is something she gets from inside his head.

That means that a Time Lord’s future is within their mind, even if they aren’t consciously able to access it. This is further supported by the mini-episode ‘The Last Day’, where a soldier fitted with a head cam has hallucinations that are later proven to be premonitions.

The BBC novels explored the idea of biodata, which contained a person’s entire timeline. Not only could you discover their past but their future as well. Manipulate their biodata and you could alter who they were and who they would be.

The Time Lords have been shown to have psychic abilities from time to time, which Susan being particularly sensitive. It is possible that they could access this locked off information, giving them premonitions of the future. The Visionary from ‘The End of Time’ might be an example of this.

This can be used to explain how a Time Lord can know elements of their own future, such as the 3rd Doctor being aware that his next incarnation will be ‘all teeth and curls’ despite regeneration usually meaning you don’t know what you are going to get.

A Time Lord’s link with their TARDIS might be the reason that prophetic messages occur. Whether it be the appearance of ‘Bad Wolf’ or an omen of four knocks will signal a regeneration these messages could have been unconsciously transmitted by the Doctor to the TARDIS who broadcasts it to sensitive psychics in the vicinity and makes it appear when it translates writing.

Within a campaign it can be troublesome to have a character who can readily access their own future. This is balanced by the fact that rarely do people have complete control of what they see and those that do, such as Bad Wolf and the TARDIS, get confused about what is the past and what is the future.

As such it could be available as a Special Good trait. When a plot point is spent they might get a glimpse of what is to come. This is only a clue as they lack the context in order to properly understand what they’ve seen. It also gives the games master an excuse to provide ominous premonitions, whether it be a repeated phrase or an actual vision.

There are plenty of aliens which display the ability to read the minds of others. How many can also access their future memories? This could allow a species to discover what is going to happen and shape the future to suit their needs.

In both cases there is the question of how this knowledge of the future affects time itself. If this is predestined then everyone would be powerless to use that knowledge to change anything. It has to happen because they saw it happen. If they are able to change it that future will never occur and the premonition was wrong.

This also has the potential to form an ontological paradox, whether the information only exists because that information was gained. For example does the interface adopting the persona of Bad Wolf, influence Roses’ adoption of that role in the War Doctor’s future?

It is worth exploring how such a gift affects a person’s life. The Visionary obviously dedicates herself to the role but the soldiers in Arcadia not only try to believe that what they are seeing are hallucinations but it demonstrates why knowing the future can be a bad thing (since in this case they are going to die).

The fact that not every Time Lord is like the Visionary demonstrates it is not something the majority of the population seek. To know the future makes them either powerless or forces them to change it. Both ideas would be unappealing to a Time Lord.

There are other uses for it within a campaign. Just as in ‘Quantum Leap’ they could get a brief timeline of an NPCs life, unless they intervene. This can provided them with motivation to make things better for them or to avert disaster.

It can allow you to provide an epilogue for NPCs, if the PCs will never meet them again. As above they are given a debrief how that person’s life will turn out, as a result of the PCs actions.

For PCs lacking a time machine exploring biodata (both their own and others) can be another way to travel into the past and future. This could provide results akin to the ‘Assassin’s Creed’ computer games, allowing them to inhabit the bodies of their ancestors.

The PCs could be in opposition to others using technology or alien abilities to manipulate biodata. Their own biodata could come under attack, changing their past to change who they are or implanting a terrible future they are powerless to avoid.

In your campaign PCs might never be able to access their future but it can still be a strange thought that it is there, locked within them. Everything that they do and everything that will happen to them already exists.

It can be incredibly tempting to peek but if they are able to resist they can take comfort in the fact everything will happen as it should. They preserve their own freewill or at least the illusion of it.

This entry was posted in 11th Doctor, Bad Wolf, day of the doctor. Bookmark the permalink.