“All of history is happening at once. But what does that mean?” 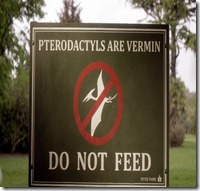 Something has gone very wrong with time in ‘The Wedding of River Song’. Winston Churchill is the Holy Roman Emperor, the war of the Roses enters it second year and pterodactyls fly through the air.

All of this is due to River Song changing a fixed point in time. Things eventually go back to normal but this is still a fascinating setting to explore in your own adventures. Since all of reality is affected no matter where your PCs are they were involved.

It is stated that it is always the 22nd of April, with the time permanently stuck at 5:02 pm.

The Doctor states that everything happens at once and will do forever, while the date and time remains the same. Confusingly there still does appear to be a passage of time that people are aware of.

In a television interview Charles Dickens is asked if his new story will top last year’s Christmas special, Winston Churchill is returning from seeing Cleopatra and the Doctor has been a prisoner in the tower long enough for him to grow a beard.

From this it is clear that there is progression of events but people just don’t question why the date doesn’t change. It is conceivable that people have established other methods to keep track of the progression of time despite the fact the sun never rises or sets anymore.

This acceptance of the new reality extends to the mingling of different parts of history. Churchill knows about downloads, Charles Dickens is comfortable on television and there are signs to warn people not to feed the pterodactyls.

Since Churchill needs the Doctor to explain the situation to him it can’t be a case of people adapting to the collapse of time. What isn’t clear is what shape this reality took when it was first formed.

Using the sign in the park as an example did that come into existence fully formed or did someone have to make it? If it did come into existence on its own was time extrapolating what people would do with the mingled elements? If someone made it did they wonder why this wasn’t a problem before.

Amy is aware of the collapse of time thanks to the influence of the crack in her house but she says that other people knew as well and were working to solve the problem. It could be that certain smart or observant people were just able to see that things didn’t make sense. This could include your PCs.

We could also question who exists in this reality. The fact that Churchill is ruling Britain indicates that he is the only ruler of UK currently in existence (which raises questions about the war of the roses which is taking place as that centred around a power struggle for the throne) and so there can’t be other historical figures that have filled that position.

The Earth could also not support the population of everyone who has and will exist. So while everything is supposedly happening at once this can’t be the reality of the situation. Rather only elements are occurring.

It could be that different parts of history are phasing in and out, along with their accompanying populations. These parts could combine in new ways, with reality reshaping itself to reflect this.

The problem is that the reality we see throughout the episode is consistent. We never see the setting change or rewrite itself. Even if the population have their memories adjusted the viewer would still be aware of the change.

We can therefore take it that the Doctor is exaggerating. From the perspective of the games master running this setting this reduces the amount of work you have to do. You don’t have to accommodate everything, only the parts of history that you find interesting.

You can introduce any historical event but change it to include famous figures who weren’t previously involved. You might have a dominant time frame overlaid with the society or organisation of a different period. For example Britain seems to be modelled around the 21st century but ruled by the Roman empire.

The best thing is that no one (except PCs who are aware of the problem) will notice the anachronisms. Things don’t need to make sense in order for the plot to progress. People with simply accept the reality presented to them.

There is plenty of potential for adventure and things do matter as we’ve established there is a progression of events. PCs could help repel a Nazi invasion of Egypt, defend Mayans from dinosaurs in South America or ensure John F Kennedy isn’t assassinated by John Booth.

You can include elements from the Doctor Who chronology as well, allowing you to have numerous alien invasions to happen all at once. Enemies might mingle as well, resulting in the Master taking the place of Davros as leader of the Daleks.

A major change would be the inability to time travel, since everything is happening at once. Does this mean that the PCs TARDIS just winks out of existence or will it be rendered inert or begin to die?

Speaking of which the Doctor says that time is dying. This is a very different thing to the end of existence. From what we can see everything has collapsed, rather than remaining in a fixed continuum.

Since time is dying, rather than dead, we can take it that this is the reason that there is still some progression. If time does die then not only will things not go back to normal but there will be no change.

Worse still people wouldn’t even be aware this had happened. In effect everything would stay the same for all eternity, frozen in place. The population would either be blissfully unaware or horribly aware of their own paralysation.

If things hadn’t been put right then the amount of progression available would have slowly diminished until it was gone altogether. This could be a way to signal to PCs adventuring in this setting that it is time to take action.

You can weave them into the background of the show, giving Amy, Rory and River Song the resources they need to rescue the Doctor and put an end to the situation. This would inevitably lead them to oppose the Silence but how do you gather information on entities you don’t remember?

This entry was posted in 11th Doctor, Setting, The Wedding of River Song. Bookmark the permalink.