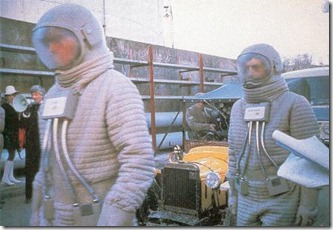 A big difference in the Doctor Who setting is the presence of a British Space Programme. It is featured heavily in ‘The Ambassadors of Death’, the supposed colonists in ‘Invasion of the Dinosaurs’ accept the existence of Earth constructed spaceships and ‘The Android Invasion’ space freighters have been in service for at least 2 years.

Such a programme could feature heavily in a UNIT campaign. In ‘Spearhead from Space’ the Brigadier suggests that the increased frequency of alien encounters is due to mankind reaching further out into space. It only stands to reason that aliens would focus their attention on the space programme.

Peaceful aliens might make contact first of all with astronauts while in orbit or while they’re exploring the planets and moons within our solar system. UNIT would need to be on hand to oversee this first contact and make sure that the aliens mean no harm and that the astronauts don’t cause a diplomatic incident.

The space programme could also be sabotaged by aliens who wish to prevent mankinds exploration of the universe. The UNIT soldiers could be on hand to protect the facilities and identify the saboteur.

Astronauts might be adversely affected by encounters with alien life or their technology. Such is the plot of ‘The Quatermass Experiment’. Returning astronauts could turn into monsters or gain wonderful powers akin to ‘The Fantastic Four’. Anything is possible in the new field of space exploration.

UNIT soldiers will need to contain the affected astronauts until the changes made to them can be understood and controlled. In extreme cases they may be forced to kill the astronaut in order to prevent a threat to the public or prevent the spread of an infection.

Shapeshifting or mind possessing aliens could choose to replace returning astronauts. UNIT might only be aware of this after the astronaut has gone AWOL. Can they find them before the alien begins its invasion plan?

The British Space Programme could also come under threat from foreign powers. The UK would appear to have technological secrets from the US and Russia that either country might want to steal or destroy.

UNIT might even work very closely with the space programme, training their soldiers for encounters on other worlds and in zero gravity. The UK know about the dangers that are waiting for them in the inky blackness, it is only logical that they have UNIT soldiers ready to face those threats.

During the course of a campaign PCs might first of all reach the moon, then Mars and then the outer planets. What wonders and adventure will they find there? How will it change them?

Eventually UNIT will have a station on the moon but they might have permanent facilities on other planets, readying to intercept any alien forces entering our solar system. Isolated and far from home how will the soldiers cope?

UNIT soldiers trained for space travel would also be the perfect people to test out captured alien vessels. This would give them an opportunity to reach even further but also put them into an even more perilous situation.

By the modern day the public seem to be largely unaware of the British Space programme in ‘The Christmas Invasion’, where a Mars probe is treated with much excitement. It could be that UNIT completely took over the British Space Programme and classified all information connected to it.

It could also be that the public was never made aware of its achievements. Only those in specialised areas or especially curious journalists found out the truth. The rest of the population were simply never told just how far mankind had reached.

The basis of the spaceship technology could have been fundamentally flawed or dangerous. Rockets could have damaged the environment or required the use of alien technology or fuel systems that mysteriously stopped working. This could have prevented the construction and use of other vessels, crippling the programme.

A time traveller from the 21st century could be astounded by the Space Programme and may even believe that history must have been altered in order for it to exist. In their own time period they might discover former astronauts who must conceal their past.

There could even be an alien conspiracy that not only stole the space travel technology but made people forget its entire existence. Can the PCs uncover the truth and reclaim their technology.

Alternatively the aliens could want humans to leave Earth in greater numbers. This could make it much easier to prey upon us, outside of our home environment. They could be responsible for the advances in technology and only the PCs can stop their evil plan.

The UNIT/British Space Programme could extend into the future. This would create a campaign that mixes Doctor Who and Star Trek. The PCs would be the first people to discover the homeworlds of the Ogrons, Autons, Zygons, Daleks and Draconians.

This could all add up to a very far reaching campaign arc, taking the PCs from the early days of UNIT into the far future.

This entry was posted in 3rd Doctor, UNIT. Bookmark the permalink.