“Do you remember who you were before they emptied you out and turned you into their puppet?” 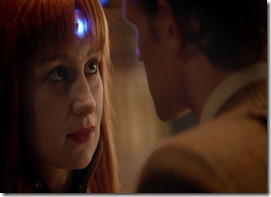 We’ve seen the Daleks converted people into their slaves before, particularly the robo-men in ‘The Dalek Invasion of Earth’ but in ‘Asylum of the Daleks’ we see an evolution of that technique. The name the Doctor gives them is Dalek Puppet.

Nano-clouds convert any organic matter into a Puppet. In this story the nano-clouds are in the atmosphere of the asylum planet. This could be an effective means of conquest for the Daleks, requiring them only to deposit the nano-clouds on to a planet to convert whole populations.

If you prefer a more controlled conversion process then subjects could be placed in sealed chambers. This keeps the nano-cloud contained and prevents the subject from escaping. This could also speed up conversion times, since the subject is receiving a higher dosage.

This process is both mental and physical in nature, with the mind being changed first of all. The will of the subject would seem to determine how long this takes. In game terms the characters Resolve would be a deciding factor.

It makes sense that the Daleks would want their Puppets mentally compliant before they are given access to Dalek weapon systems. Conceivably those infected could find a way to trick the nano-cloud into believing that they had been brain-washed, allowing them to use their new physical capabilities ahead of schedule.

According to Oswin, who knows a thing or two about the conversion process, you turn someone into a Dalek by removing love and adding anger. This is good roleplaying guidance for anyone undergoing the process or behaviour for an NPC to display to indicate they’ve been infected.

Memories are affected during the process, with Amy having the same conversation with the Doctor several times. This could be a process of reorganising their brain, so they can access their memories but it doesn’t determine their behaviour.

It would also appear to warp the infecteds perception, making Amy see a group of Daleks as a mix of friendly people. Presumably this would prevent someone undergoing the process panicking or trying to escape, as well as preparing their mind to be programmed for obedience.

Within a roleplaying game the players are dependent on the games master to tell them what their senses are telling them. If they are infected they can no longer trust what they are experiencing.

A games master might describe them meeting a group of friendly people, only revealing the truth when uninfected PCs arrive. Not only is this frightening it establishes that anyone that character meets subsequently might also be a Dalek.

Physically the Puppets are fitted with an eyestalk and extermination ray, both of which can be withdrawn into their body. Since the nano-cloud can reanimate the dead there could be skeletal upgrades, allowing them to move even when the  body is physically inactive.

Since most Puppets have their own eyes to see the eyestalk could give them access to the Daleks range of senses. This could allow them to see thermal images, infrared and other spectral bands, along with targeting systems.

In game terms you may wish to give a Puppet access to the Scan ability when the eyestalk is out.

The extermination ray gives the Puppet an offensive capability lacking from the robo-men. It would appear to have the stun setting, allowing Darla to capture the Doctor. You may wish to use the weapon attributes listed on page 101 of the Doctor Who games master guide or lower it, presenting that it is being powered by a Puppet.

Physically a Puppet is cold to the touch. This could indicate that their physical body is dead, now only kept functioning by the Dalek systems. This might make them harder to see under thermal imaging.

A Puppet can make an excellent sleeper agent. Their cover can be so deep even they are unaware that they are a Puppet. The fact that anyone could be a Puppet can add a sense of paranoia to a campaign and could make a good Dark Secret.

We see that the Daleks are able to place Puppets anywhere in space and time, since they kidnap the Ponds from the 21st century. This extends their reach greatly, meaning there is nowhere that the PCs are safe.

The Daleks might enact a far reaching plan, seeding time and space with sleeper agents. They may focus on important historical events or fixed points in time watching for any time travellers.

This would mean that they’d always have a Puppet in place should something important happen. This would greatly increase their response time or allow them to track time travellers.

PCs might not even realise they’ve been interacting with Puppets. They could find themselves shadowed by the Daleks only to discover trusted NPCs have been working for the enemy all along.

It would appear that the Doctor is able to cure Amy once they return to the TARDIS. It is unknown if a Puppet can be changed back or freed from the Daleks influence. This could be an important story point if the PCs want to save an NPC they’ve befriended.

It could also form a story arc for a Puppet that has become self-aware. They know what they are and want to be free of its influence yet are powerless to prevent their darker side taking over.

Fellow PCs would also have to decide whether they trust them or whether this is all an elaborate ruse in order for the Puppet to get closer to them. It could just be waiting for the right moment to betray them for its Dalek masters.

Puppets are an exciting development in the Dalek mythos. Adventures can now be centred around them, allowing you to run a Dalek related story without featuring the Daleks themselves. It is enough that their puppets are on hand to act as their agents.

You might also consider how Puppets react to other aliens and monsters. What would happen if the Cybermen tried to convert one? Are they immune to the memory erasing powers of the Silence? Can a Weeping Angel feed on them or infect them?

It is also interesting to note that these Puppets are similar in many ways to the Movellans. Might the Daleks have created their own enemy? Might the PCs be instrumental in allowing the Puppets to regain their free will?

This entry was posted in 11th Doctor, Asylum of the Daleks. Bookmark the permalink.