"I thought you’d run out of ways to make me sick, but hello again!”

‘Asylum of the Daleks’ presents us with new facts about the Daleks. This information can be incorporated into a campaign, presenting us with several exciting possibilities. With only one episode to go on there are still plenty of gaps in our knowledge but nothing that an enterprising games master can’t fill in.

The Parliaments of the Daleks 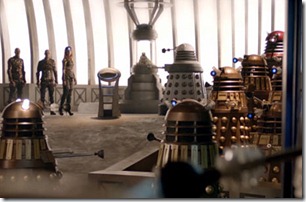 It was a surprise to find that the Daleks now have a parliament, since we normally associate them with a military structure. I believe this is a reflection of the time in which this story is set. The Daleks are no longer running a military campaign of conquest. They’ve won and can now establish a government.

We associate a parliament with democracy but that doesn’t need to be the case. The word comes from the French  word for speak, parler, with parlement being a discussion. The parliament can simply be a forum for different Daleks to appeal to a governing body, most likely consisting of the elite Daleks.

This makes sense if the Daleks is far reaching. Each colony or sector of space would require an individual administrator Dalek who would report to the parliament. The Daleks are not a hive mind and can develop their own personalities. It is very likely that they would have different views on how to run their own area of responsibility and appeal to the parliament for resources, support and even changes in law.

In the new Dalek paradigm we know that the new colourful Daleks had specific specialities. Within the parliament they could give their expert opinion to the Prime Minister on how to deal with any appeals or requests.

For the first time we find that the Daleks are being led by a Prime Minister rather than an emperor. It is telling that this Dalek mutant is exposed in a transparent tube, rather than in a shell.

I believe this is because the Prime Minister is secure in its position. No longer does it feel that it can be placed in danger from others. Nor does it need direct access to weapons when so many Daleks are available to carry out a kill order.

This raises the question of if the Prime Minister is elected. Are there political campaigns in which potential candidates try to woo Dalek voters? Do they have different stances on how the Dalek empire should be governed?

It is possible that the Daleks select or create a Prime Minister specifically for the job. Given their tendency to turn on each other it isn’t hard to imagine that if the empire suffers too many setbacks the current Prime Minister is exterminated and a new one put into place.

The Prime Minister in this story seems rather more sane than the other Daleks. This could be due to the fact it is not confined within a shell, something that has been attributed to the hysterical state of most of the race.

This could be start of change in the Dalek race, with their attitude changing towards their own identity. Across the Dalek conquered sections of the universe there could be a realisation that mental stability is improved if a Dalek is allowed to go off-duty and slip out of their shell.

This is an exciting avenue to explore as it leads to less intense Daleks who suddenly discover social interaction and a desire for entertainment. For the first time their culture would not be geared towards war and killing.

Given their history it seems obvious that Daleks would first make use of slaves for relaxation. Over time they may develop emotional bond with their slaves, which could change their attitude to how they view other species.

Since Daleks are big on racial purity they might instead decide to socialise only with each other. Would they gain an appreciation for their exposed mutant bodies? Can they breed? Would they start to customise their physical appearance to set them apart from others?

These social bonds could lead to Daleks disobeying orders. A Dalek would be less likely to sacrifice their life if they had loved ones at home. If a Dalek  was destroyed their partner or friend may direct their hatred not only at the killer but the commanding officer who sent their friend to their death.

Such behaviour could lead to these practices being out-lawed or made taboo. While this might reduce the problem once they’d had a taste of the forbidden there would continue to be rebels. They would simply ‘socialise’ in secret, something the PCs or freedom fighters could use to blackmail a Dalek with.

The longer the Daleks have this position of dominance the more generations of Daleks will be created who have never known war. While their superiors preach hatred of other races these new Daleks would see only species that help them and can offer ideas and views that are mentally stimulating.

This younger generation may decide that change is required. Whether they use violence, protests or work within the system to have a like minded Prime Minister elected will depend on their background.

With different Dalek cultures developing across the universe they may establish their own national identities. This could lead to different factions of Daleks, initially all working together but slowly becoming independent. Of course this leads to the possibility of a Dalek civil war.

The Dalek Parliament allows us to few the Daleks in a social context. The PCs might not be able to topple their empire but they can get involved in their political manipulations. There could be Dalek groups or Prime Ministerial candidate that are less hard line than their contemporaries. If the PCs help them they could improve conditions within the empire.

PCs could be captured and made the personal slave of someone within the parliament. This would give them a great insight into the developing Dalek society. They would be closely scrutinised but they’d always have that rare chance to strike at a Dalek when it was most vulnerable. Doing so would almost certainly be a death sentence but it could be worth it.

A campaign could be based around PCs enslaved within the Dalek Empire. If you decide that some Daleks will soften their view then players could take their role. Can they engineer change within Dalek politics without being killed either by other Daleks or freedom fighters.

Dalek politics would be incredibly cutthroat, filled with treachery and military coups. This can make a dry subject very exciting, as you never know what political policy or bill will have you declared ‘un-Dalek’ or exterminated in your own home.

You may also wish history to repeat itself and have a Guy Fawkes inspired bomb plot designed to eliminate the Dalek Parliament. Do the PCs help them? They might have reason to oppose it if they believe that the current Prime Minister is a force for good or that the Daleks with retaliate by slaughtering billions.

If the parliament is destroyed what then? Is this the beginning of the end for the Daleks or simply a return to a more military organisation? Either possibility can generate further adventures for the PCs.

This entry was posted in 11th Doctor, Asylum of the Daleks, Setting. Bookmark the permalink.

3 Responses to "I thought you’d run out of ways to make me sick, but hello again!”