“And besides, I find circuses a little sinister.” 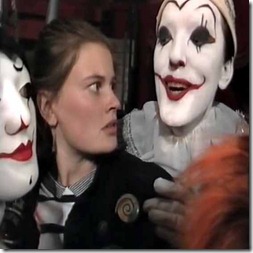 A reoccurring plot thread for Ace is confronting her fears. From the dread she felt at Gabriel Chase to her issues with her mother the Doctor always seemed to make her face her demons.

In ‘The Greatest Show In The Galaxy’ it is quickly established that Ace finds clowns creepy. It becomes almost inevitable that she would later be menaced by clowns. An important part of Ace’s character is that even when she is frightened she hides it with bravado, standing up to her attackers.

Many roleplaying systems allow players to define a characters fear as a disadvantage, providing a negative mechanic that makes things difficult for them in return for providing them with extra points during character creation.

There are two drawbacks to this. Firstly players rarely enjoy having their characters disadvantages used against. If  a character has a fear of spiders their player could feel that their games master is victimising them if he sets an adventure on Metebelis 3, even though that is exactly why they received the extra points.

Secondly this makes the player mindful of just how many phobias and fears they give their character to prevent abuse. This instils  the belief that the character ONLY has to be afraid of those things defined on their character sheet.

A better solution is to encourage a player to define their characters fears on a case by case situation. Players should be allow to introduce things that they are afraid of during each adventure.

Just as Ace does in this story player characters could express dislike for specific things, knowing that they will likely be confronted with them later. For example if the TARDIS arrives in a supposedly haunted castle a PC might express their fear of ghosts, if  they are in fishing village a PC could express his hatred of sharks upon being confronted with a caught specimen.

In return the player receives an automatic extra story point. This is upon the understanding that the object of their fear will appear later. In any scene the selected subject appears they receive a further story point.

In return they suffer a –2 to all tasks made against the subject or to resist its effects. This represents the character struggling with their emotions. This can make it difficult to concentrate, fight or run away.

In addition if the subject has Fear Factor it is increased by 1 level, gaining +2 to their checks. This applies only to the PC, all other checks are performed normally. This represents that they are extra scary to the specified player.

This will encourage players to use this option to benefit from the steady refreshing of story points. These are not supposed to be crippling phobias. It is very likely that by succeeding in the adventure they have overcome their fears.

Ideally this should be used to spotlight a character, their fear being a subplot of the main adventure. For this reason it is suggested that only one PC per adventure make use of this tactic, or at least only allow one PC to fear one particular thing.

This technique can also be used to enhance a characters personal story. They might have a very good reason to fear the things they do. Ace’s past history with Gabriel Chase adds a lot to her character and the story in ‘Ghost Light’.

Players could be rewarded with an extra story point if they find a good way to work their fear into the back story. Just why are they afraid of things they are? Perhaps they are afraid of storms because lightening set fire to their family home, maybe they fear the sea because their father’s ship went down in a tidal wave.

A fear could also occur due to events during the campaign. If a Time Lord PC’s last regeneration was caused by being shot by a Dalek he might have extra reason to fear them next time they meet.

There are many adventures that are built around fears coming to life, such as ‘The God Complex’ and ‘Night Terrors’. This mechanic makes such adventures much easier since players are rewarded for revealing their characters personal fears early on and are rewarded for it throughout.

After at least one scene in which a character has been frightened they can remove the fear by spending 1 story point. The games master may require them to do this in conjunction with confronting or overcoming the subject of their fear.

This allows a player to retain control of just when their character will be frightened. It doesn’t matter if their character has been suffering from a fear of fire during the adventure, when they need to run into a burning building to save their friend they are going to get rid of that disadvantage.

At the end of an adventure PCs can automatically remove any fears. In the future they can either use the same fear or decide that it no longer troubles them. This reflects the fact that characters often grow as a result of an adventure.

This entry was posted in 7th Doctor, Greatest Show In The Galaxy, Rules. Bookmark the permalink.