"At first there were the Daleks, and then there was a man who fought them. And then in time, he died.” 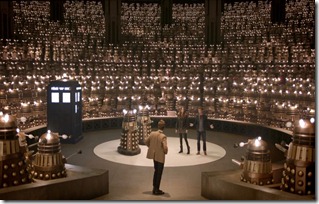 ‘Asylum of the Daleks’ gives us a self-contained story filled with the clever plot, humour and chills that we’ve come to associate with writer Steven Moffat. After their rather lacklustre reintroduction in ‘Victory of the Daleks’ the Doctor’s oldest enemies gain some addition qualities that make them even more terrifying.

Spoilers from here on in!

The opening on Skaro, with its impressive giant stone Dalek and rain drenched city, served both as a reminder of where the Dalek story began and that there are some things the Doctor can’t fix.

At some point in history the Dalek empire is vast and powerful, a time when no one escapes their prison camps. For so long we’ve seen the Doctor thwart the Daleks before they’ve got their plan off the ground is useful to show that they are frightening because their conquest of the universe is inevitable. One day the Doctor won’t stop them.

I was wondering how this series would handle the new status quo established in ‘The Wedding of River Song’, with the universe believing that the Doctor was dead. The introduction of the Doctor, angrily stalking through the shadows and wishing that people would stop saying that he can help, addressed this nicely. He is finding it difficult to escape his own legend.

It also makes sense that the Daleks would refuse to believe that he was truly dead. Of all his enemies they know better than most that you can never kill this particular Time Lord. He has been a part of their history so long they probably can’t imagine a universe without him.

I questioned the wisdom of bringing Amy and Rory back, as they received a good send off in both ‘The God Complex’ and ‘The Wedding of River Song’. What more could be said? Wouldn’t anything more tarnish their happy ending?

My fears seemed to be confirmed, foreshadowed in the mini-episode story ‘Pond Life’, showing that Amy and Rory’s marriage has already ended. Rory always seemed to love Amy more and without the Doctor or his adventures to distract them how long could they maintain their fragile relationship? There is difference between waiting for something and actually receiving it.

Thankfully this conflict was part of the story, giving an added problem for the Doctor to solve, a re-examination of the relationship between Rory and Amy and an angry tension between the two throughout the adventure.

The plot itself, that the Daleks require the Doctor and his companions to be sent of a suicide mission into a mental asylum for insane Daleks, is both a good hook and reminiscent of ‘Genesis of the Daleks.’ In both stories the main characters are sent in dangerous territory, without the TARDIS, while wearing wrist bands that are vital to their safety.

Overall I feel that the asylum was a missed opportunity. The Daleks within were defined more by their decrepitude than their insanity. We were never shown anything that would frighten a fully functioning squad of Daleks.

Having said that there was a suitable air of gothic menace. A notable set-piece, that beautifully demonstrated Moffat’s ability to make a scene both funny and scary, was Rory surrounded by Daleks slowly awakening, chanting their catch-phrase ‘Exterminate!’

Director Nick Hurran pulled off some wonderful sequences here. My favourite being Amy’s distorted view of the Daleks, in a particular the red headed ballerina who in reality was a classic black and white Dalek madly spinning.

The glimpses of previous models of Dalek, however brief, were a nice call back to the past series, as were the sloping angled architecture which were similar to what we’ve seen on Skaro.

The ward of traumatised Daleks, all survivors of previous encounters with the Doctor, was another treat for long term fans, allowing them to recognise the names of the planets the Daleks were stationed at before their significance is explained to the new fans.

The biggest development for the Daleks in this story is the introduction of nano-clouds that covert people into Daleks or a new form of robomen. Zombie Dalek people are a truly terrifying idea. The scene of the zombies on a black and white screen, showing that they’ve got the band that was protecting Amy from infection, was straight from a horror movie.

This means of infection is in keeping with the Daleks, as they’ve frequently shown a fondness for germ warfare. All of which can be traced back to the philosophical debate between the Doctor and Davros in ‘Genesis of the Daleks’.

The main cast were great as always. Matt Smith silently showing the Doctor’s thought process as he tries to work out how to solve all the problems he is currently faced with, his frustration at finding an unappreciative audience for his quips in the Daleks and his discovery of who Oswin was were highlights.

Karen Gillan and Arthur Darvill shared a powerful scene in which Rory is willing to sacrifice his life for Amy because he contends that he loves her more. It is a scene that is filled with anger, regret, sorrow and love that firmly establishes the characters relationship and just how far they will go to save each other. Both actors convincingly sell this maelstrom of emotion.

From a story point of view, the revelation that Amy was letting Rory go to make him happy, must tie back to the Doctor’s reason for saying goodbye to them in ‘The God Complex’. Amy has taken the wrong lesson away from the Doctor here and it will be interesting to see what the long term effect of that is.

Lastly we have the introduction of Jenna-Louise Coleman playing Oswin. She had a nice enigmatic introduction, fitting Moffat’s template of the highly intelligent sassy counterpart for the Doctor. Although separated from the main characters she was none the less vital to the plot and delivered the episodes biggest shock.

Although I suspected her true nature early on (at one point I wondered if she was the asylum Operating System and her name was a clue to this) the revelation was suitably emotional. Credit must be given to Jenna-Louise here, as she made me care about her character and her horrible fate.

At the conclusion of the story  the status quo between the Doctor and the Daleks is changed. I am glad to see that the series continues to move away from the demi-god Time Lord who can solve problems just by uttering his name. Let us see how long that lasts.

This was a strong first episode, clearly setting out the intention for this series to be more self-contained. I did enjoy the excitement and momentum ‘The Impossible Astronaut’ created I can understand the general audiences desire for something that doesn’t require as much commitment.

This entry was posted in 11th Doctor, Asylum of the Daleks, First Thoughts. Bookmark the permalink.

2 Responses to "At first there were the Daleks, and then there was a man who fought them. And then in time, he died.”