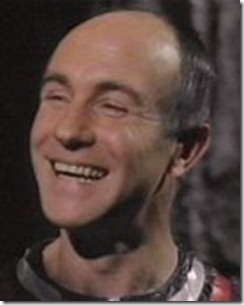 Doctor Who Magazine (Issue 448) has an interesting piece of trivia about Drax in the ‘Fact of Fiction’ coverage of ‘The Armageddon Factor’. Writers Bob Baker and Dave Martin had hoped that the character would have been popular enough to return to Doctor Who and might even have his own spin-off series.

They imagined that this would be a type of science fiction ‘Steptoe and Son’. Given that their original plan was to include Drax in ‘The Hand of Fear’, with a garage of old TARDISes, we can assume that he would have been operating in the late 1970s.

Although this didn’t lead to anything within the series there is no reason not to make this plan come true in your own campaign. Drax is a very different kind of Time Lord. He is roguish without being villainous, has a unique way of talking and seems more interested in money than power.

The scenario I think would be most likely is that Drax is stranded in a one particular time period, either due to being exiled by the Time Lords or because his TARDIS breaks down. Using his engineering skills he makes a living helping other stranded aliens and time travellers.

It doesn’t matter which period of the 20th or 21st century arrives, since his long lifetime means he can be encountered in multiple time zones. To fit in to the ‘Steptoe and Son’ vibe he could arrive just after the 1940s, posing as a rag and bone man, gradually coming to pose as a antiques dealer or trader.

Planning ahead it would make sense to establish his business as ‘Drax & Son’. When he eventually regenerates, either due to a misadventure or to avoid an angry customer, he can take over his own business posing as his son. He could do this several times to avoid suspicions about his long life.

Clients could bring technology to Drax to repair. He will be one of the few people in the time frame with advanced knowledge of machinery. This could be useful to PCs, especially if their TARDIS breaks down.

Drax could also scour the area for technology that he can use or potentially resell. This could be found abandoned by previous aliens and time travellers, recovered from the site of failed alien invasions or created by ahead of their time inventors.

If we keep with the idea that Drax has a garage of old TARDISes where does he get them from? We have seen that when Time Lords exile people to Earth they arrive in their TARDIS, which are deactivated or otherwise limited.

These TARDISes could be hidden or discarded, just waiting for Drax to seek them out in his time. They can then be stripped for parts or he can attempt to reactivate them. By the time he gets his hands on them they could be very run down with plenty of quirks.

Partially repaired TARDISes could be hired out to clients. They would have restricted travel distance and Drax could put a timer in them so they automatically return to present, the length of time depending on how much they pay.

This would give PC groups without a time machine of their own a chance to travel to the future or past. There is also a built in time limit when they must get back to their TARDIS or risk being stranded.

He would make a good shifty contact for any group operating in the modern day, whether it be for UNIT, Torchwood or even Sarah Jane Smith and the kids of Bannerman Road. Drax can provide information, gadgets and stories about the Doctor during his Academy days.

If they establish a good relationship Drax could come to them when he gets into trouble, if he thinks they can obtain a piece of valuable technology or tip them off to anyone who might be looking for something dangerous.

Drax might also cause problems for PCs, supplying advanced technology to their enemies. Drax will plead that he is just doing business but if it puts the group or the world in danger they could soon view him as a menace.

Drax or a Time Lord like him could form the basis of a campaign. PCs wouldn’t be saving the world but running a business. Their clients would provide adventure hooks, either through the technology they bring in or their requests.

The tone of such a campaign will usually be much more comedic, with the characters wheeling and dealing. They’ll have to avoid the attention of the police, UNIT and the Time Lords who might disapprove of introducing anachronistic technology into the time period.

Not that there couldn’t be some menace. The clients might have a desire to take over the world and the PCs will need to sabotage their efforts by providing them with substandard equipment. Criminals might hear of their abilities and force the PCs to help them pull off a heist. The technology itself might go haywire and endanger the local area, if not the planet.

Such a campaign should look to ‘Steptoe and Son’, ‘The Minder’ and ‘Lovejoy’ for inspiration. The roleplaying game ‘Bookhounds of London’ is also based around the idea of PCs doing business with unsavoury clients who might bring about the end of the world.

This entry was posted in 4th Doctor, Setting. Bookmark the permalink.