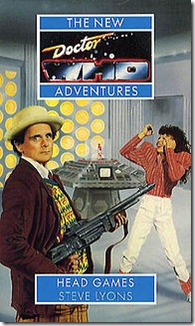 In a sequel to ‘Conundrum’ energy from the Land of Fiction is leaking into the real world. The Doctor has a plan to stop it but it will doom the planet Detrios. At the same time the energy has re-powered former Master of the Land of Fiction, Jason.

Jason creates the fictional Dr Who to whisk him away and gain revenge on the Doctor and his companions. In doing so the Doctor is reunited with Mel Bush, although she isn’t pleased with what he has become.

With Ace returning to help the Doctor and his companions, old and new, must defeat his fictional alter-ego, save the Queen and doom a planet.

This is another fun story, demonstrating that the continuity of the novels is so well established that it can afford to do sequels to earlier stories. The return of Mel helps highlight how much the 7th Doctor changed from his first television series to his portrayal in the books.

This begins a trend of former companions having less than favourable reunions with the Doctor. Whether it is Peri encountering him in ‘Bad Therapy’ or Sarah Jane Smith crossing paths with the Doctor in ‘Bullet Time’ they are not impressed with the man he has become.

The burden the Doctor carries in saving the universe is one of the themes of this story and one that continues into the current series. Recent 11th Doctor episodes have done a good job of carrying on this idea, that sometimes the Doctor has to hurt people for the greater good.

This is a book in which the Doctor encounters two versions of himself. The idolised Dr Who, who nonetheless is prone to violence, and a warped version of the 6th Doctor, furious that the 7th Doctor forced him to regenerate.

The theory that the 7th Doctor replaced the 6th because he felt he wasn’t what the universe needed had been alluded to before. At the time it helped explain why a simple bump on the head was enough to trigger a regeneration.

I think this probably stems from the low opinion most people had for the 6th Doctors run around this time, not due to the actor but due to some of the writing and production decisions during his era.. It was easier to suggest that he was replaced by something better, the 7th Doctor.

Since the publication of these novels Colin Baker has done excellent work in the Big Finish audios and that, along with the novels, redeems his Doctor. ‘Spiral Scratch’ gives another reason why the 6th Doctor regenerated but this novel is still an interesting experiment in taking the rivalry between the incarnations of the Doctor to an extreme.

Along similar lines Mel is often seen as one of the poorer companions but her portrayal here, in the Big Finish audios and in the novels demonstrate why she is an interesting character. Idealistic with a positive outlook she contrasts nicely with more cynical attitude of the New Adventure companions.

Here Mel realises that the Doctor mentally pushed her into leaving him to join up with Sabalom Glitz, expanding on an idea suggested in ‘Sky Pirates!’ This continues to be a defining trait of the 7th Doctor as a manipulator.

The ‘modern’ day Earth scenes are set in the year 2001, the near future when the book was published in 1995. Luckily the book doesn’t portray anything that has dated the book, correctly guessing that the Queen would still be alive.

The leak of fictional energy from the Land of Fiction is ripe with possibilities. Fictional characters could come to life and start roaming the universe, people could find that wishes are being granted or that other miracles are occurring.

All create a mystery which PCs can investigate and trace to their source. They could then face a similar dilemma that the Doctor faces here. People could be left worse off if the fictional energy was removed.

This could be a fun way to have an adventure feature an appearance an incarnation of the Doctor, or several of them. If one of the PCs is the Doctor they might wonder why they don’t remember these earlier encounters only to discover that they are versions created by peoples belief in him.

This could fit into the current theme of the television series where the Doctor has become a legend in many cultures. Some see the Doctor as a saviour, some as a bringer of death and destruction, some see him as a goblin, imp or even a demon. What if the fictional energy gave these versions life, each with their own TARDIS?

Long running campaigns can have several past companions over the years. This story illustrates an effective way to use a returning character. Whether they are a PC or NPC they help highlight the difference in eras.

The idea of different incarnations of the same Time Lord hating each other is fascinating. Having one of the villains in the campaign be a past or future incarnation of a Time Lord PC would create lots of tension.

They don’t need to be evil like the Valeyard. Past incarnations might just be aware that the current Time Lord PC incarnation will deliberately trigger a regeneration or the Time Lord PC could find out that their future self is going to do the same to them.

In this situation a Time Lord might seek out a way to prevent this, hoping that their future is not written in stone. At the same time the future incarnation will need to ensure that they come into existence.

Further to this we learn that the reason that Time Lords are only granted 12 regenerations is because anymore and they develop multiple personality disorders. This could be explored in an adventure based around a Time Lord who learn this the hard way.

Could there be Time Lords roaming space and time with hundreds of regenerations, each incarnations getting crazier and crazier?

This entry was posted in 7th Doctor, books. Bookmark the permalink.