This is a historical adventure set on the Arabian Peninsula. Mixing actual events (or at least a version of them) with science fiction it is a chance for time travellers to become involved in a little known natural disaster. 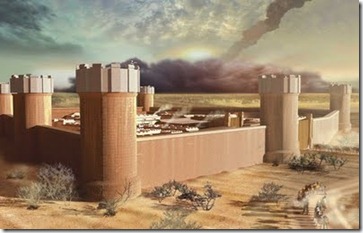 The ancient city of Ubar has stood for close to 5,000 years. A thriving metropolis where Persians, Greeks and Romans came to mingle and trade. The city was built above a lime cave filled with water, allowing it to thrive in the desert.

Today the city is visited by two more travellers, a representative of the Avisous and the Nala. The Avisious are shapeshifters and renowned for their mastery of genetics. The Nala are a brutish humanoid species with greyish skin, tusks and trunk. Constantly at war with one species or another the Nala representative is using a holographic disguise to go unnoticed in the city.

The Avisious representative, Jessil, has arranged a meeting with the Nala Commander Gor to sell a particularly potent genetic virus. Those virus alters the genes of whoever they infect to survive in their immediate surroundings. This would of great benefit to the Nala who are struggling to conquer worlds hostile to their biology.

The sale of genetic technology to the Nala is forbidden by galactic war, as most species fear that they will become unstoppable. The Avisious, greedy to a fault, arranged the meeting on Earth, believing the transaction will go unnoticed on such an insignificant backwater world.

Luckily for the galactic community the PCs TARDIS has picked up a communication between the two species arranging a meeting in the central market place in Ubar. Even if the characters don’t have first hand knowledge of the alien species the TARDIS databanks do and it is clear that no good can come of their meeting, especially on Earth.

The TARDIS materialises in the city and the PCs task is clear. Find the Avisious and the Nala and stop the exchange, whatever it might be.

WHAT THE PCS CAN DO

Travelling through the city PCs should be impressed by its sheer size and history. The population are wealthy and there streets are full of travellers from the major civilisations of the era, bringing with them intriguing artefacts.

One thing they might also notice is the number of wells they pass as they make their way to the market, after asking for directions. As buckets are hoisted up there is barely an water in them, leading to worries that there is little left to sate the thirst of the population.

With larger concerns the PCs should press on to the market. This is just as busy as the streets, with stalls full of wares making it difficult to see. Characters will have better luck splitting up or climbing to a higher vantage point on one of the many buildings around the market.

The aliens are both in disguise (as a Persian and Greek respectively) so the PCs will need to look carefully for something that doesn’t belong on this planet or time period. Gadgets are the best way to detect the use of alien technology but a simple awareness check from someone in the right place at the right time will allow a PC to spot the exchange of alien currency and technology, in this case a sinister ebony canister.

It is up to the PCs whether they raise the alarm, potentially risking alerting the aliens, or try to sneak up on the aliens, which has its own risks as the aliens go their separate ways. Either way they don’t have long before they feel the first tremor of an earthquake.

At first people aren’t overly concerned. This isn’t the first time that the ground has shaken. Then there is a sound like thunder, as the ground starts to give way beneath them. Buildings, people and sand are swallowed up into the depths below.

The city was built above a great lime pit, filled with water. Over the centuries the city has drained that water, leaving the cave brittle. Today is the day that the cave finally collapses beneath the great weight placed upon it.

The PCs are no exception and there is no way to escape falling into the depths, with rubble and sand falling on top of them. You may award them plot points for putting them into such a terrible situation.

They awaken in inky darkness, some more badly injured that others. They are the lucky ones, they survived. Buried beneath the sand a crazy maze has formed amongst the ruins of the city, the remains of buildings providing crawl spaces.  People can be heard calling for help in a variety of languages.

The enormity of what has happened might take some time for the players to digest and leave them wondering what they can do. This is a good opportunity to see how their characters behave during a crisis.

Do they help who they can? Do they start searching for a way out? Do they stay focused on their mission and try to track the aliens? Or do they try to get back to the TARDIS?

Firstly getting to the TARDIS isn’t easy, since it too is buried. Getting out is possible since there are networks of tunnels connected to the limestone cave. A few are connected to the outside, the fact that the air supply isn’t running out is proof of this.

Heading in either direction (toward an exit or towards the TARDIS), with any survivors that they care to bring with them, leads to their first encounter with the consequences of the aliens presence.

In the distance screams are heard, survivors they encounter claim to have seen monsters. PCs might at first think this is reference to the Avisious or Nala. Not until they find a badly injured Commander Gor do they learn the truth.

Standing over his body is an albino humanoid with claw-like hands and no eyes. It has a mouth full of teeth and is capable of spitting acid. If startled it will flee, burrowing through the ground.

Nala, close to death, will explain what was in the canister and that he dropped it when they fell. When he awoke he witnessed several of the humans transforming. Searching nearby they can find the shattered remains of the canister.

It would appear that the virus has transformed a potentially large section of the city into a form of subterranean being. Distressed and confused these molemen are lashing out, unwittingly infecting others with the virus which is carried in their blood.

While the molemen present a danger to the survivors they could also be a means of salvation. They are best suited to survive in their environment and could burrow their way to the surface to allow others to escape.

If they can reason with the mole men, make them understand what has happened to them, then the PCs could both find the TARDIS and free the other uninfected survivors. This can be done verbally but this could be an opportunity for a PC with telepathy to shine.

Finding Jessil, no easy task due to his shape shifting ability, could offer up the possibility of finding a cure for the mole men. It could take centuries for Jessil to do this, since he is unfamiliar with human DNA, but there is hope.

In the meantime the mole men will have to live in the tunnels and the ruins of a once mighty city, passing on their mutation to their children. Given enough time they will form a secret subterranean world that PCs might encounter some time in the future.

Alternatively the PCs might continue to treat the mole men like monsters. In which case bright lights can cause them pain, either through battery powered torches or fire. A sonic screwdriver might also be painful for their sensitive ears, forcing them to flee.

In this scenario, where the PCs aren’t looking for a cure, they may treat Jessil more harshly when they encounter him. The PCs might want to take him into custody so that he stands trial for his crimes, if they can get him back to their TARDIS and deposit him before a galactic council of some kind.

In either case the PCs will have survived a disaster that wiped an ancient city for the surface of the world and history.

This entry was posted in Adventure. Bookmark the permalink.