One of the things I really enjoyed about ‘The God Complex’, written by Toby Whithouse, was the cast of supporting characters. Established early Rita, Howie, Joe and Gibbs are all strong characters, each playing a role that strengthens the story.

These prisoner have already spent some time in the mysterious hotel that has trapped them, bonding as a group. The Doctor and his companions are outsiders and more importantly don’t immediately bring any answers.

Unlike many Dr Who stories these supporting cast members don’t see why the main characters are important. Indeed, Rita comments that the Doctor’s belief that it is his responsibility to save them indicates he has a god complex.

This both serves to make the situation more frightening, because the Doctor and his companions aren’t special in this situation, and puts them on a more equal status with the other prisoners.

In a game taking this approach can help the player characters break away from staying in their own little group. It emphasises that only by mixing with the NPCs can they hope to overcome their situation.

Rita is introduced as a strong candidate as a new companion. She already does everything that the Doctor tries to encourage in his companions, notably using her observation skills to work out the situation.

In a game this could be a good approach for introducing a new player to the group or for a player to try out a new character. For example, if Amy’s player was thinking of changing characters she could play as Rita during this adventure, deciding at the end which one she wished to continue playing.

Even if such a character is just a NPC this potential would hopefully make the players more attached to her. Allies are hard to come by when you explore the whole universe and finding someone who is more help than hindrance is a rare joy.

Before long players could hope that such a NPC survives the adventure and that they might meet them again later in the campaign. They’ll work to develop a good relationship and already be thinking about the benefits this character can provide.

Which makes the loss of such a character have all the more impact. Even a threat against them has more weight. Players might be confident in their own survival but protecting an NPC is a different matter. They know such a character can die without derailing the campaign, but that doesn’t mean they want that to happen.

Joe is the NPC who gets to demonstrate to the main characters the nature of the threat. Through him they can observe the gradual possession and that it ultimately leads him to sacrifice himself to the minotaur. This helps gives clues to what is going on and recognise the warning signs that will lead to their death.

Howie is the neurotic character, his ramblings a good way to explore ideas about what is going on. This can be a useful role for a NPC in an adventure, speculating and suggesting theories that can encourage players to think about what is happening.

When a theory is suggested to them they’ll have a instinctive feeling about whether it is right or wrong. This can help them hone in on what elements ring true until they have come up with their own ideas about what is happening.

Howie’s youth suggests vulnerability and potential. It is also clear that he is similar in many ways to Rory. Similarities can allow player characters to bond with NPCs, as long as they don’t feel they are being copied or having their role in the game taken away.

Gibbis serves many purposes during the adventure. As the only alien, other than the Doctor and the minotaur, he is a reminder of the science fiction element of the show. His defining characteristic, cowardice, is used both as a comedic element and to give him motivations that cause conflict.

People have their own agendas and the more people and the smaller the environment the quicker this causes problems. In this particular scenario the nature of the possession is the main cause of NPCs putting others in danger but it can very well occur in other situations.

NPCs might decide to go obtain a resource (such as food or medicine), run away from a threat or launch an attack on a perceived enemy. They might do this without consulting the player characters, preventing them from achieving their own goals, or deceive them if the NPC thinks they’ll oppose their plan.

This can be overcome through unity and strong leadership. It is not another for the player characters to tell others what they have to do, they have to earn their trust. Which is one of the issues in this story, why should the others listen to the Doctor when people keep dying?

Gibbis could have been an annoying character but the Doctor goes out of his way to explain that his negative trait of cowardice is actually a positive. His deviousness, his will to survive, can actually benefit them.

This is a good approach to using negative traits in NPCs. In a normal situation the player characters might avoid someone with such characteristics but those same traits can benefit them now.

Lucy, the victim from the opening, also serves an important function. Her letter provides valuable clues about what is happening but she also establishes a history for hotel. Other people have been there, other people have died.

Providing a past for adventure helps hide the fact that everything exists for the benefit of the player. It creates the illusion that there other people having their own adventures, even if they don’t all survive. 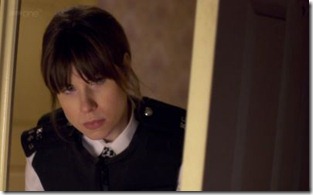 It establishes a context for the characters actions. What they do matters because they are not the only ones in the universe. For example, in this adventure had the Doctor and friends not shut down the hotel other people would have been taken prisoner.

Now that they’ve stopped it no one will suffer as others have before them. Their victory has a meaning besides just making it out a live. This is what makes them heroes.

Creating strong, memorable NPCs that have an impact on the structure of an adventure relies on having a small cast. This is best achieved in an isolated location but can be done in more sprawling games.

There might be minor NPCs but as long as there are only a handful of important ones players will be able to keep track of them and, more importantly, form a connection.

This entry was posted in 11th Doctor, The God Complex. Bookmark the permalink.