“Statement… rejected. Do not be alarmed. This is a kindness.” 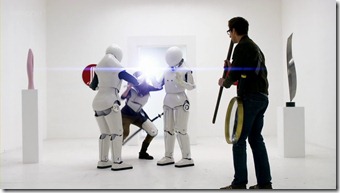 The main threat in ‘The Girl Who Waited’ comes from the Handbots. Due to poor programming they reject Amy’s explanation that she isn’t a native and that their medicine will kill her. As sophisticated as the Handbots are they are still only machines.

Player characters may arrive on planets long after the native species has been reduced to dust. All that remains are their robotic servants, following their pre-programmed lives, unable to deviate or even realise that those who created them are no longer alive.

These robotic servants offer a fascinating glimpse at long dead civilisations. By simply observing the robots and their routines the characters can get an idea about their alien creators just by the function they perform.

Do the robots resemble the beings that made them? Are they functional in design or were they made to be beautiful to look at? Shapes and colour could have cultural importance that could allow a character to better understand their alien surroundings.

The robots could be friendly at first, mistaking the time travellers for their creators. This could aide the characters, not only providing hospitality but giving them access to other sections of the alien planet. They could even act as guides.

You may wish to use the same plot twist as ‘The Girl Who Waited’ and have the robots programmed to carry out an action that was helpful to their creators but lethal to the player characters.

Food might be poisonous, the native species might have relaxed in acid baths or had their robot servants bury them in the ground to sleep. Unless the time travellers are familiar with the habits of the alien species they might accidentally find their lives in danger from helpful robots.

Alternatively the robots may be hostile immediately, either mistaking the player characters for hostile entities or because they just don’t recognise their species. The robots might go on the attack, protecting their creators.

The player characters will realise how futile the robots actions are. There is no one left to protect. The trick will be convincing the robots of that fact. If successful the robots might cease their attack.

While this does allow the player characters to explore unmolested it has its draw backs. They might become trapped in an automated building. They would need to follow the routine of the robots, working out when doors open and close, in order to escape. Along the way they could get a glimpse at what life on the planet used to be like.

It could also be that the behaviour of the robots is harmful, as they blindly follow their programming. Robots designed to travel through space mining for ore might destroy ships in their path and ruin the environment of any world they come to, those programmed to rescue those in distress could lack the programming to ever let them go.

It is possible that the player characters could trigger changes in the robots behaviour. They might have other programs to follow but the conditions to follow them haven’t yet occurred.

The creators might have foreseen their own demise and given instructions of what to do next to the the robots. If the player characters can make them aware that day has come they might initiate their creators plan.

On a world where the robots have a sufficient degree of intelligence to be called sentient they may have already broken free of their programming. Their creators might have formed the basis of their mythology, viewed as gods.

Would such a culture worship them for giving them life or fear and hate them due to the centuries of enslavement. Upon meeting organic beings for the first time, the player characters, how will this culture react?

Robots aren’t the only type of machines that might go on working long after their creators have died. Factories could have continually crafted products, weapons and vehicles for consumers who no longer exist, automated spaceships wander the void of space collecting data for nobody and vast AI computers wait eternally to answer a question that never comes.

Finding these remnants of other cultures can reflect aspects in our own world, which is becoming ever more mechanised. Might mankind leave similar machines to stumble through the last days of the universe?

The robots and machines might be a tool that someone wants to use. Perhaps farming robots could be repurposed to eliminate famine on a starving world. A warlord could hope to turn the robots into an army to eliminate his enemies. 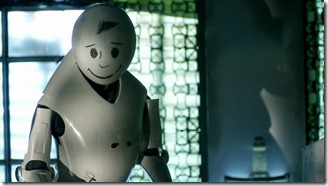 Those who follow orders might see something of themselves in the robots and realise they need to think for themselves. Characters who are androids might realise how lucky they are to have freewill.

Others might question what happens when the role you have been designed for becomes redundant? Do you adapt or is your existence pointless?

Later adventures might take the player characters into the past to see the civilisation at its height of power. They could see the first of these robots being constructed, all the while knowing the fate that will befall everyone there.

A trip into the past could even be the main purpose of the adventure. Borrowing from the plot of ‘Star Trek 4’ they might have to go back in time to collect one of the creators so that they can be brought forward and command the robots to cease their destructive actions.

This entry was posted in 11th Doctor, The Girl Who Waited. Bookmark the permalink.