“Scary stuff. Getting under his skin. Frightening him.” 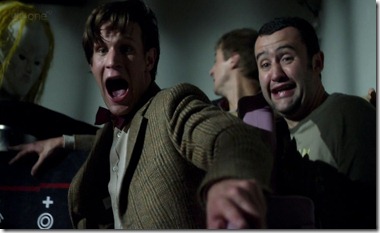 Fear as a tangible thing is a reoccurring theme in Doctor Who. Not only does it occur in ‘Night Terrors’ but within the same season we also have ‘The God Complex’, featuring room’s that contain your worst fears.

The Doctor Who universe your fears can become real. This could be a psychic phenomenon or the result of mind reading shape-shifting aliens. It could be an intentional weapon or just an unfortunate side effect of coming in contact with a sentient mind.

This allows for adventures that can be very personal to the player characters. The menace they face is directly caused by their own fears. Defeating them depends on them confronting the source of this fear.

This is very much in keeping with the theme of Doctor Who, that we have the strength within us to overcome any obstacles we face. It was also a major character arc for Ace, confronting her problems in such stories as ‘The Curse of Fenric’ and ‘Ghost Light’.

In order for this adventure to work a games master must know what it is that the player characters fear. Suspicious players might wonder why they are being asked and give an answer that will put their character in the least amount of danger (for example a fear of pants).

A better approach is to ask the players a series of questions about their character prior to running a fear themed game. The games master can draw attention away from the fear based questions by also asking what motivates the character, what is their favourite memory is, their greatest regret, the best gift they ever received and who their best friend was growing up.

Not only does this provide a wealth of information and insight into the character it helps to make the adventure more personal. A player might initially say that they are afraid of snakes but their other questions might reveal a fear of letting people down, traumatic memories of their house being on fire or failure to save a friend from drowning because they were afraid of the water.

Overcoming a fear shaped threat is more than just making a defiant stand and saying that they’re not afraid. The character has to look within themselves, seek out the cause and find a way to move past their issues.

In game mechanic terms this would require a Resolve check, with negative modifiers applied until the player role plays their character dealing with their own issues.

This can lead to a character growing. A character might realise he couldn’t have saved his friend and learn to forgive himself, another character might find that his aggressive persona is to prevent people from getting too close because he is afraid of being emotionally hurt.

Their companions and friends can also gain a greater insight into the character, after witnessing an inner part of their psyche being given form. They could come to understand why they behave the way they do and emphasise.

This particular scenario is dependent on a continued link between the player character and what is giving their fears life. It could very well be that once the fear is brought into existence the entity has a life of its own.

In this situation they should be treated as any other monster or alien. You may wish to impose some negative modifiers when the player character is taking any action against them, or to make them particularly vulnerable to the creatures Fear Factor.

Fear given life can be an interesting way to introduce a new enemy for the player characters, especially if the new entity is able to escape into the universe. Later they may arrive on an alien planet plagued by the monsters they accidentally created.

In ‘Night Terrors’ it is George, a small boy, who is giving his fears form. In this scenario the player characters are put in the role of psychiatrists and councillors. They can’t just attack the symptom, they need to provide a cure.

It might not be initially apparent that the player characters are in this type of scenario. The characters might think they are in a typical ‘base under siege’ adventure, trapped on a remote oil rig being attacked by sea serpents until one of the NPC crew mentions that this is his worst nightmare. Upon investigation they discover that the attacks began when the NPC arrived on the oil rig and make the obvious connection.

If there are several NPCs the scenario can almost be a mystery, the player characters using detective work to discover just who it is that is the source of the fears they face. The NPCs might try and conceal this fact if it is embarrassing, shameful or would reveal a crime.

Once they know who is the cause of the fears being manifested the player characters can help them address the problem. This leads to the climax in ‘Night Terrors’ with Alex assuring his son that his fears of being rejected are unfounded.

This is primarily a roleplaying exercise. They can’t threat, charm, bluff or beat the NPC into not being afraid anymore. Investigation can help the player characters gain information about where the fear might be coming from but they will need to convince the character themselves.

The computer game ‘Psychonauts’ is a good example of this. In the game psychics enter a subjects mind and are attacked by his fears. By explore his mind the player uncovers memories that show the source of the fear and eventually how to defeat them. They emerge having healed the subject of their inner demons.

This type of adventure can be a scary one off or can be the basis of an on-going campaign arc. There are certainly enough god-like beings who feed on fear and cause them to manifest.

The player characters could make it their mission to search the universe and protect people from their own fears. They know that each adventure will be a nightmare but that this evil must be fought.

This entry was posted in 11th Doctor, Night Terrors. Bookmark the permalink.