“Many travellers have come through the rift, like Auntie and Uncle and Nephew. I repair them when they break.”

God-like abilities are common in science fiction so it is not surprising that more than few have been encountered by the Doctor. Amongst their number are the Guardians, the Eternals, the Osirians, the Celestial Toy Maker and now House.

One of the fears about discovering new life forms is that they will be better than us, more powerful. Such entities are not bound by mortal limits, which gives them the illusion of godhood.

In such circumstances even the Doctor is diminished in their presence. He isn’t necessarily smarter than they are and his mastery of science might not aide him. He and his companions are at the mercy of these beings.

In ‘The Doctor’s Wife’ House is a living asteroid. A space-borne species with an organic centre surrounded by minerals, giving him the appearance of being a small planetoid. This is similar to the life cycle of the Artifact from ‘Parasite’, the planet sized Charon from ‘Sky Pirates!‘ and the morphic worlds of both ‘Grimm Reality’ and ‘The Crooked World’.

Such a being can’t be defeated physically unless the player characters have access to planet destroying weapons or exert a gravitational influence to change the creatures orbit. Here the enemy is as much a setting as it is a character.

House reveals that it can repair organic beings on his surface. This gives him the power of life and death, as Aunt and Uncle die once he withdraws his influence. His control also extends to possessing others.

It is this ability to affect others that makes House fit the criteria of  a god-like being. It can compel others to do his whim and decide whether they will die. There is no defence against him.

This basic setup has rich potential even without the later revelation that House has been draining arton energy from TARDISes and Time Lords alike. House could appear quite benevolent to those who end up on his surface, rescued from death, until the implications are examined.

Player characters might encounter a similar entity and either be saved by its influence or encounter other survivors. The planet might have a pleasant personality and enjoy the company of the player characters.

It is only when they try to leave that things take a turn for the worse. What if the planet doesn’t want them to leave or take people with them? What if it threatens to take the life he has gifted them away?

In such a situation the planet is not truly evil. It is simply not equipped to deal with the emotional ramifications of what is about to happen. When facing an eternity of loneliness one can hardly blame it for not wanting people to leave.

Alternatively, taking a dark route, the planet might have a sadistic personality. This planet makes no attempt to hide its motives. Those who inhabit its surface are there only to amuse it, usually through torture.

This could lead to a similar situation found in Harlan Ellison’s story ‘I Have No Mouth, And I Must Scream.’ In that story the last people alive in the world are tortured endlessly by a computer powered by pure hate. Even the release brought through death is denied them.

Although House does have a physical body his all-knowing nature and reach makes him virtually insubstantial. He is everywhere because he is everything around the characters. This continues when he inhabits the TARDIS. There House is still the environment.

It is rare for the TARDIS to become possessed. Even in ‘The Edge of Destruction’ it was still the TARDIS that was responsible for the trials the crew were put here. With House in control the corridors become mazes and Amy and Rory fall prey to his psychic illusions (although considering the temporal nature of the TARDIS there might also be some manipulation of time).

These scenes illustrate the potential for an evil entity to be in control of a TARDIS. Whole adventures could be spent trapped inside a TARDIS. It could create a wide range of environments from tiny rooms that they can barely fit in to vast rooms filled with deserts or chasms.

This evil TARDIS could trick people to enter it or use a time scoop. This could be used to envelope more play things or threats to the occupants. This would turn it into a mobile time-travelling Death Zone, pitting its captives against each other.

This could lead to a quest to regain control of the TARDIS, perhaps with the player characters making their way to the mythical engine rooms or Eye of Harmony. Along the way they fight monsters and try to find allies to join them. 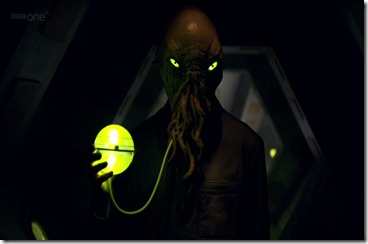 This would make for a more traditional D&D style game with the TARDIS becoming the ultimate dungeon. This could develop naturally from an established campaign or be the start of a new game, with the player characters having no idea of how they got there or the true nature of their environments.

Although overcoming an opponent as powerful as House appears hopeless Doctor Who is an optimistic show. It is through intelligence and bravery that the heroes are able to defeat him.

Here House put himself into an environment that he wasn’t as familiar with as he was his own body. With the TARDIS matrix still alive within Idris there was someone who knew more about his host body than he did and as part of the ship he could be deleted.

This is a good illustration that god-like beings make mistakes. Player characters can manipulate them  and trick them. They can use the entities own arrogance against them, making them take actions without thinking through the consequences.

This entry was posted in 11th Doctor, Doctor's Wife, Setting. Bookmark the permalink.