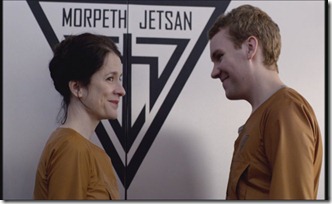 When the Doctor bids goodbye to Cleaves and Ganger Dicken they are about to inform the public about the true nature of Flesh. For them the story is not yet over. Undoubtedly this will lead to a long crusade and major social upheaval.

What should be said is that really this shouldn’t be about equal rights for Gangers. The otherwise excellent ‘Doctor Who: The Brilliant Book 2012’ suggests that it is, with India giving 1.6 million Gangers their freedom but this doesn’t hold up to much scrutiny.

The problem is that without a controller in a rig a ganger would collapse into a puddle of goo, as we saw both the Amy and Melody gangers do once the originals connection was severed.

Barring freak accidents gangers don’t have their own personalities. They are just animated collections of Flesh. It would appear that an electrical charge can give them cohesion, allowing them to retain the thought patterns of the controller.

The issues raised by the events in ‘The Rebel Flesh/The Almost People’ should really be about the whether it is ethical to keep using a substance that can feel pain. Although they are just puppets it would be wrong to send them to their ‘deaths’.

What would Morpeth Jetsan, the company that produces Flesh, do with this knowledge? Shutting down operations could financially ruin them, which outweighs any bad publicity they might suffer.

Player characters might become involved in the corporations attempts to silence the protestors and eliminate evidence that supports their claim. They could also help the company in their attempts to develop a new form of Flesh, one that has no awareness.

Without the Flesh what alternative would big companies have when dealing with hazardous environments? This could lead to a resurgence of research into robotics and artificial intelligence.

If we do allow the idea that all gangers are sentient, then this becomes a much bigger issue. The world population would suddenly be swelled by gangers who were only ever designed to be temporary. The anti-slavery sentiment might soon wear off when cities become overcrowded, jobs become scarce and resources start running out.

This would be an extremely heated era for the player characters to explore. Would mobs vent their anger on the gangers, driving them from their homes? Would some gangers decided to embrace their inhuman nature and decide they are not bound by the same morality as their creators?

Faced with hostility some gangers might form their own communities, even seeking out their own nation. There might also be those who continue the fight for equal rights, even taking steps to entering politics, ultimately hoping to become president or prime minister.

There are also the smaller, personal stories. What of the ganger who can never be with the woman he loves because she is married to his former controller? After his father dies a child might set out to find his ganger, hoping to replace the father he lost. Will the player characters aide him in his quest?

Since this is a game that deals with time travel we can also think about what eventually happens to the gangers. Previous Doctor Who stories set in the future don’t mention them at all.

Were they wiped out, either by humans or by alien forces? ‘The Dalek Invasion of Earth’ occurs in the 22nd century and it isn’t hard to imagine that the invaders might destroy the gangers, possibly because they are resistant to robo conversion.

They might also have made it into space. Somewhere out amongst the stars there might be a planet of gangers. If the player characters arrived there what kind of reception would they receive? Would the gangers live in fear of their human oppressors?

A third option is that gangers are embraced, the two races no longer recognising the differences. This means that many of the characters encountered in stories after the 22nd century were actually gangers, it was just never mentioned.

What we do know is that a ganger rig exists in the 51st century. It is possible that it is not native to the time zone, brought there in the same manner that Amy was, but considering that it could maintain a link with Amy throughout time and outside the universe suggests that it is much more advanced.

This raises the possibility of using gangers to explore time. A campaign could be built around player characters stationed in the 51st century sending their gangers into the past. This allows them to take more risks, since even if the ganger dies the original player character is safe, ready for their next mission.

This would lead to a much more dangerous and amoral campaign. Who would give the player characters their mission? What would their agenda be and would they tell them that the gangers felt pain?

A ganger would make an interesting player character. For the most part they would appear human but in moments of stress they might take on a more inhuman appearance. Over time they might even be able to shape shift or taking on more monstrous aspects.

Even more interesting, what if the ganger shares the same identity as another member of the TARDIS crew? Would they embrace their similarities or seek their own identity? This could lead to a very entertaining character arc, exploring just how they feel about each other.

This entry was posted in 11th Doctor, The Almost People. Bookmark the permalink.