“You see these eyes? They’re old eyes. And one thing I can tell you, Alex. Monsters are real.” 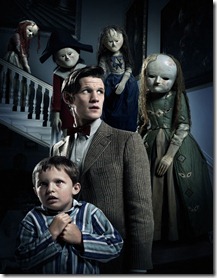 Doctor Who’s mandate was to educate and entertain but quickly gained a reputation as something to scare children, resulting in the phrase ‘Behind the Sofa’. It seems appropriate then that an episode about a child’s fear should be one of Mark Gattis’s best scripts.

‘Night Terrors’ does share similarities with ‘Fear Her’ and the themes of RTD’s era. In particular the scene in which the Doctor and his companions go door to door to find the child in need only to be blocked at each turn recalls Russell T Davies’ book ‘Damaged Goods’.

Where this excels is the performances from the cast and the direction by Richard Clark. Together these two factors make this episode something special. Although it is not without its faults.

Child actors are always a tricky, as demonstrated in ‘The Almost People’ and while you can excuse their inexperience due to age it doesn’t making it an any more pleasant viewing experience.

Jamie Oram as George didn’t inspire great hope in his initial appearance. Cleverly the script didn’t require him to do little more than look scared for the majority of his screen time. Thankfully he successfully nailed the climatic scene of the story.

Far better was Daniel Mays as his father Alex. For a man who was concerned about his son being terrified of everything he himself was constantly terrified. This nicely communicated that fear isn’t solely the providence of the young.

He worked brilliantly with Matt Smith. Once again the Doctor is required to act ‘normal’ , in this case in order to gain the confidence of Alex and George. Usually confident and assured here he feels uncomfortable in his own skin, all too aware that his behaviour might give the game away.

Here we see both his child-like nature, when he plays with George’s toys or suffering huge mood swings when trying to decide whether to open the cupboard, and his centuries of experience, ignoring Alex’s command to get out his house while calmly making himself a cup of tea.

The minor characters were also portrayed in an entertaining manner. Andrew Tiernan as Purcell made an ogre-like land lord, inspiring fear in Alex with his bulldog. What could have been a single note villain was successfully layered by showing us a glimpse at his home life.

It was amusing that when his carpet turned to quick sand he continued to call out to his dog to help him, who showed no reaction at all. Here we see how alone he really is. All emotional investment he has put in his pet won’t save him.

Similarly Leila Hoffman as Mrs Rossiter managed to add several dimensions to her role as the old lady. She inspires fear in George, shows fierce determination when she tells the Doctor that she can look after herself once has a new hip and finally sad vulnerability.

Rory and Amy were side-lined this week, forced to wander a dark mansion, unable to influence how events played out. Still it was nice to see them coping without the Doctor, both in trying to work out where they were and avoiding the monsters.

Richard Clark, who also did an excellent job of directing ‘The Doctor’s Wife’, brings a magical touch to the council estate. His long shots of all the different coloured doors and stretching yellow corridors made the whole place feel more vibrant than the concrete greys of the Powell estate.

The normality of the estate was contrasted with the shadowy dolls house the companions found themselves in. It would have been obvious to most where they were but the surreal nature of all the wooden props was nicely done.

The dolls were the real monsters in this story. While their  appearance was fine I think the moment they became truly scary was when they demonstrated the ability to change others into dolls with just a touch.

The lose of identity is somehow more terrifying that just physical harm or death. The idea that you will become one of them, that you will do the same to those you hold dear is much more nightmarish.

The core idea, a child’s fear becomes real, is not that original but what saves it is both the witty script and the pay-off. Both show Gattis’s passion for both Dr Who and the horror genre. 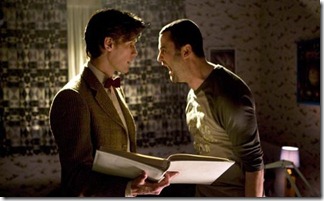 The reveal that George was the cause of the problems was masterfully done, the Doctor badgering Alex until he blurts out that his wife can’t have children. That single fact hangs in the air as both men turn to look at the child who should not be.

Rather than having George as an alien invader Gattis takes another tact, making this a story that can be read on one level as about adoption. Ultimately Alex realises that it doesn’t matter if George is biologically his, he is still his son and he will protect him.

This ‘power of love’ ending works rather better than it did in ‘Victory of the Daleks’. Here it resonates. I’m sure that the sentiment will be felt by children who fear abandonment, showing that familial bonds are stronger than genetics.

This episode was originally supposed to air earlier in the season and it certainly shows. George’s nature, a cuckoo in the nest, would certainly tied into the reveal that Amy had been replaced with a Flesh duplicate.

Rory lacks the fire that he gained his quest to reclaim his wife and that remained with him last week when he was punching out nazis right and left. In ‘Night Terrors’ we are back to the meeker Rory.

As it is the idea of raising a child seems oddly out of place given that Amy and Rory have lost that chance. It is all too obvious that the reminder of the Doctor’s death was added on to the end.

Still, this episode renewed my confidence in Gattis. This was closer to the quality of ‘The League of Gentlemen’ than his earlier Who work. After initial worries I can certainly see myself watching this episode again.

1 Response to “You see these eyes? They’re old eyes. And one thing I can tell you, Alex. Monsters are real.”