End of the Road 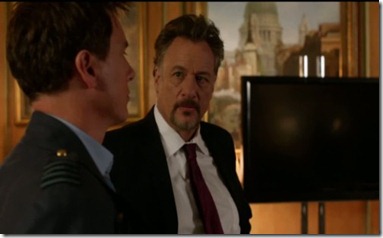 We’re so close to the end yet it feels like we’re barely moving. After the build up of last week we find that Angelo didn’t have anything to do with Miracle Day and promptly dies.  His death, in a world where no one dies, was neat twist but it remains frustrating that the Families are still out of reach.

The highlight of the episode was most certainly the guest turn by John de Lancie as Allen Shapiro. He got all the best lines and acted everyone off the screen. His character was a powerful force of nature who put the regular cast to shame, deporting Gwen in the process.

John Barrowman improves the more screen time Captain Jack is given. The revelation that a past love had been watching him all those years was touching, as was the scene in which Jack falls apart as Angelo dies.

We had some nice pay offs to early story lines, with Rex bringing Brian Friedkin to justice and Esther’s conversation with her sister motivating her betrayal of Jack to the CIA. These moments of narrative continuity have been sorely missing from the series so far.

Oswald Danes returns in an all too brief storyline where he tries to be normal. He attempts this by going on a date with a prostitute but at least we see Oswald struggling for a little character growth and in doing so revealing the monster still inside him.

The re-introduction of the CIA added a certain level of competency, both with the way that Allen Shapiro took control at Angelo’s mansion and with the placement of an agent as Jilly Kitzinger’s PA. It was also nice to see both Rex and Esther reconnecting with those at the CIA, receiving both assistance and information.

It did feel that this episode was very much about cleaning house before the final two episodes. In quick turn we get the deaths of Angelo, his granddaughter and Brain Friedkin. The majority of the episode is given over to exposition, taking nearly 20 minutes before we even cut away from the mansion.

The reveal that Angelo and his agents were benign is puzzling when you consider the extreme lengths they went to, especially the kidnapping of Gwen’s family. Jack’s reaction to finding out that Angelo is still alive certainly indicates that if they’d just approached him he’d have been more than happy to come to the mansion of his own free will.

The discovery of the nullification board and its connection to Torchwood helped to strengthen the links between this storyline and previous seasons but rang false when Jack asserted that this single piece of technology could spell the end of humanity.

Consider that this piece of technology was recovered from the ruins of the Torchwood hub. Chances are that other piece of alien technology were also there. If Jack thought any of them dangerous why didn’t he take steps to make sure they didn’t fall into the wrong hands?

The involvement of the CIA also illustrated how redundant Torchwood are. Jack and Gwen’s bluster that the CIA was working for Torchwood didn’t convince anyone, let alone themselves.

We also received further news of the world falling apart off-screen. In this case Europe’s economy was crashing, with real-world allusions to our own financial depression. It is lucky that none of these events are happening where the main characters are.

It is probably not a good idea to bring attention to the difference between ‘Miracle Day’ and previous seasons by having characters getting nostalgic about the good old days when they fought aliens and knew what was happening. I’m sure that Gwen and Rhys’ yearning for the past was shared by more than a few of the viewers.

There was some development with Oswald Dane who learnt that the government were going to kill him after all, bringing in Category 0 to do away with criminals. This step should have been apparent from Day 1 but at least the government finally caught up.

It was interesting that Dane found that his celebrity wasn’t going to save him and this had only been a brief stay of execution. This led to Oswald unleashing his fury on Jilly in a very raw and ugly manner.

It isn’t clear why the Families are approaching Jilly or what she has done to bring herself to their attention. She put on a good show but rarely seemed to have any control of Oswald, who was doing what she requested because it suited him. What place would she have in the Families organisation?

I enjoyed the scene with Esther and her sister, particularly the notion that people could volunteer to be Category 1. It wasn’t clear how this would work, given that the sister was being held because she wasn’t mentally fitted.

One can only hope that the authorities won’t have allowed her to put her child on the list as she said. The very idea is completely unworkable, especially as the children are in care. They’d be rather surprised that not only had their mother volunteered them for a trip to the ovens but that the government were going to follow through on it.

We learnt little more information. We already knew about the Families and their involvement with the Blessing. The only new information was that Angelo wasn’t involved and we didn’t even know he existed until last episode.

The scope of the episode was limited, restricting itself to only a few locations such as the manor, the hotel bedroom and the CIA office. Characters had little choice but to stand around and talk and talk and talk.

It also robbed the episode of any momentum. Last week Gwen and Jack were in a car going somewhere with a sense of purpose. It couldn’t help but look like the writers were playing for time.

It isn’t the end of the road but it certainly feels like the series will be hobbling over the finish line rather than running.

This entry was posted in Torchwood. Bookmark the permalink.

1 Response to End of the Road