“I’m the Doctor, and you’re in the biggest library in the Universe. Look me up.” 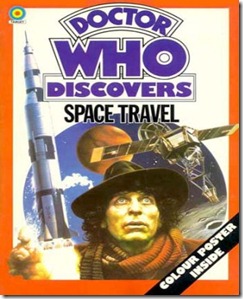 Doctor Who: Corners of the Universe

Having covered time this book would concentrate on space. The aim would be to give the games master the confidence to create alien worlds and provide players the tools to create space-centric characters.

The first chapter would be targeted at the player, providing suggestions on characters who regularly go into space. This could cover everything from space traders, pirates, explorers, early 21st century astronauts or mercenaries during the Dalek war.

The second chapter would give a crash course on astronomy. What types of stars are there? What affect does the size and position of a planet have on its environment and what forms of life might develop there?

This section would give advice on how an alien player character’s abilities might be due to their home world. If they’re strong maybe they came from a world with a high gravitational pull than Earth. If they can fly maybe they come from a gas giant, living in he upper atmosphere.

The games master would learn what is possible when creating adventures set on alien worlds as well as which celestial objects present their own dangers, such as black holes and suns about to go nova.

Next there would be a chapter on space travel itself. Starting with the early history of space exploration it would explain about the difficulties facing astronauts, the challenge of overcoming the speed of light and just how you explore something as big as space.

There would also be discussion of the various forms of space travel portrayed in Dr Who and science fiction such as sleeper and generational ships, hyper drives and trans-mats. Advice would be given on picking the right form of transport for the right adventure.

Finishing out the chapter would be rules for ship to ship combat, boarding vessels and hiding from intruders. Outside of combat there would also be rules for trying to operate in zero gravity, the long lasting affects of weightlessness on the human body and the challenges of performing a space walk to carry out vital maintenance.

The following chapter would cover the future history of Dr Who, using the same format as in ‘Yesterday Today!’. This would give the reader a break down of what happened when, what clothes people wore and the organisations that were in place.

With the background established there would be a chapter on the Dr Who universe, highlighting who the major players are. It would of course cover the threat posed by the Daleks and Cybermen but also explore the conflict between the Sontarans and the Rutans, the skirmish between the humans and Draconians and the birth of the Earth Federation.

The goal would be to make the Dr Who universe an easily accessible place, with a clear idea of how everything fits together. This would help any games master who wants to run a space game set in a particular era understand what is out there and what is going on.

This would be a good place for write-ups of any alien races that haven’t yet been presented in the other books, particularly the more obscure races such as the Wirm, Drahvin, Alpha Centurions and others.

A travel guide chapter would outline notable alien worlds with advice given on how to use them for adventures. The Doctor could provide brief anecdotes of his adventures and impressions of these planets. This could be a great source of inspiration for games masters. Looking for where to have your next adventure? Just flick through and see if something catches your interest.

A map giving the relative positions of these worlds would be a great boon as I’m not aware of anything similar being published before. It would also look great as a pull-out poster. In a star spanning adventure a map like this could see a lot of use.

Now that the reader is familiar with the Dr Who universe they can read the next chapter which gives advice on creating new world and aliens, drawing up the information provided in previous sections.

This would give advice not only on what an alien species could look like and do but what philosophy or forms of government they could follow and how their science could develop. Above all it would remind the games master to focus on what suits the adventure.

A chapter dedicated to the games master would give further advice on typical space related scenarios. Everything from moon bases under siege, first contact missions going horribly wrong to full blown war between stellar empires.

The hope would be that readers of the book would be excited with the sheer number of adventures they can have in space. There really would be no limit to where the TARDIS could take a group of player characters.

The final chapter would be a collection of adventures. They’d cover the whole progress of space travel, from the first steps out of the solar system, to exploration, expansion and eventually when space travel is so common people don’t give it a second thought.

The two books ‘Yesterday Today!’ and ‘Corners of the Universe’ would be sold both individually and as a two book collection, at a slight discount. Those interested in only one can buy just that book without losing out but having both gives the reader a vast amount of resource, as well as being a more appealing prospect due to the lower price tag when brought as a pair.

Not only would it provide a huge amount of roleplaying information it would contain enough Dr Who lore and real world information that it would be entertaining for a casual reader.

Next we’ll look at other supplements that could be released.

This entry was posted in roleplaying. Bookmark the permalink.

1 Response to “I’m the Doctor, and you’re in the biggest library in the Universe. Look me up.”