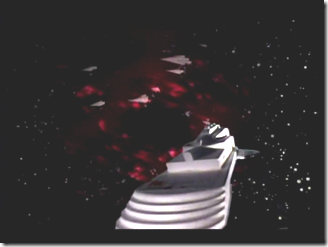 With the co-ordinates from the Dark Sun pamphlet Phillipa noted that the TARDIS was travelling only a few weeks further into the future and several star systems away. After recharging the Inspector hologram see left the safety of the time machine.

The TARDIS had materialised on the docking port of a space station, several other spaceships connected by airlock tubes. As well as humans there were some aliens she recognised such as Draconians and Ice Warriors (from her previous adventures) and some she didn’t such as the Alpha Centurions.

Deciding that these people wouldn’t find the Inspector hologram unusual she activated him, to keep her company. As people exited the docks a security guard dressed in a tuxedo was checking the guests names off a check list on his electronic clip board. Nervously she gave her name only to find that she was expected. Had the Inspector got her name on the list?

Following the guests through the space station she noted the many doors indicated they were for Dark Sun employees only. The could also hear the rhythmic beat of the engines, which I tapped out on the table to the Doctor Who theme.

Reaching a huge observation deck they found the party was in full swing with guests mingling, drinking and nibbling on the exquisite food the waiters offered on silver trays. Through the large windows a swirling black hole could be seen.

Chatting with a draconian, Lord Galen, Phillipa learnt that everyone was a potential investor in Dark Sun travels, keen to see how they could support their claims. Although they’d initially been worried that the space station was situated so close to a black hole they were satisfied its engines were keeping them at a safe distance.

An announcement was made that honoured guests Mr Raven and Mr Dove had arrived. Phillipa noted the old men, one dressed in a black suit and the other in white but didn’t think anything of them. Only the holographic Inspector suspected who they really were and wondered why they were there.

Before they could investigate Maigelus took the stage, welcoming the guests and promising them a place in history. He briefly outlined how Dark Sun technologies would work, resulting in the holographic Inspector to heckle him, accusing him of being unable to prove his theory.

It was at this point that Maigelus gave the order and had the space station launched towards the black hole, disconnecting itself from the docking port. The guests were shocked but with the drinks and food still on offer they settled down.

A waiter approached Phillipa with two invites. Both Mr Raven and Mr Dove had requested her presence in their private quarters on the space base. The holographic Inspector warned her that they were most likely the Guardians, powerful entities that even the Time Lords feared.

Deciding to go to see Mr Dove first she found his room was also completely white, from the carpet to the paint on the walls. She listened to Mr Dove as he explained that the events on the station threatened the existence of the universe.

Although they could not act directly they could choose an agent to act on their behalf. Both Guardians had chosen Phillipa but she could only accept one gift. If she acted in her name he could give her the gift of life. When asked what that meant he replied she’d know when the time came.

Not wishing to decided without hearing what Mr Raven had to offer she travelled to the other side of the station and found Mr Raven’s quarters was decorated in shades of black. He defended his position as champion of chaos, pointing out that great things can come from change as opposed to the sterility of perfect order.

The holographic Inspector accused Mr Raven of trying to upset the balance of the universe but the Guardian had little interest in hearing from a child’s toy. Phillipa shut down the hologram and asked what Mr Raven offered. His gift of ‘survival’ was just as cryptic to her.

Walking back to the observation deck Phillipa reactivated the hologram who finally recognised that the sound of the engines were the twin heart beats of Time Lord, possibly even the real Inspector.

With his help Phillipa managed to override the controls of a security door, although a ‘Yes and’ result meant she’d also triggered a silent alarm. She wouldn’t have long to explore the lower workings of the station. Quickly she descended.

Among the engines she found the badly burned body of the Time Lord, suspended by chains above a circular field of energy, powered by his regeneration. Although he was clearly in agony she explored the surrounding area.

In a small room she found the dead bodies of the Time Agents, identified by the holographic Inspector. Under his direction she selected the least damaged time band, which she affixed to her arm.

At the front of the station she found a crude version of the Eye of Harmony, pointed towards the black hole which was almost upon them. The Inspector was horrified at what Maigelus would do with the technology, let alone that he had been able to construct it.

Returning to the central chamber Phillipa successfully made her strength+athletics roll to lower the Time Lord to the ground. She’d seen him regenerate several times while he’d been suspended but now, out of the energy field, he seemed to be dying.

She asked him his name but he replied it had been so long since he’d been called by his name. He said that he knew Phillipa would be the one to save him. He explained he’d been captured by Maigelus and tortured. He warned that the questions Maigelus  asked indicated someone was telling him what to ask.

It was clear to Phillipa that the Time Lord was dying. He told her that although it was the end there was always hope. Seeing the holographic Inspector he mused that he looked so young. He then died for the final time. The players had decided that this was indeed the real Inspector and were quite emotional at his demise.

They didn’t have long to mourn as Maigelus entered, flanked by armed security officers. He proclaimed whatever act of sabotage they’d planned they were far too late!