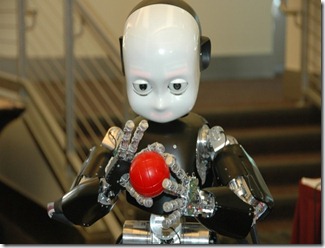 Phillipa made her way through the city, finding that all the vehicles hovered, although she didn’t really see the point as they floated a few inches off the ground. A school bus passed and she waved to the excited children on board.

Arriving at the Empty Men headquarters Phillipa found a group of protestors, demanding the group return lost friends that had been brainwashed, mixed in with accusations that they were terrorists.

Ignoring them Phillipa entered, joining two other people as they waited to be seen. Phillipa chatted with the couple, Kat & Pryce, learning that they were unable to have children. While they were joining due to depression Phillipa was pretending to be extremely cheerful, almost overly keen to join up.

The first masked Empty Man greeted her, calling himself Greeter. Phillipa cheerfully confirmed that she was empty and a shell of a person before being directed to follow the white line to be seen by Examiner.

I established that the Empty Men’s mask displayed a single emotion, which was often reflected in the way they acted. Greeter was a smiling grin while those responsible for security had angry faces. The use of titles helped indicate that they didn’t use names, just roles which anyone could assume.

Following the line to Examiner Phillipa rested on a large chair and was shown a series of photos, asked to give her response to each one. Phillipa wondered if she was given the correct response as she could tell that Examiner was flustered by her responses. The players were also wondering if there was any psychological basis for the questions I asked (which were just things like what their first pet was, why a child was crying and their favourite colour).

Led into a central meeting room, the new recruits were questioned by several Empty Men all calling themselves Inspector. Phillipa was questioned about her motives and the Inspector asked if she was ready to give up everything and if she understood the past was a lie.

When she confirmed she was she was given robes and a blank ‘novice’ mask and sent to the women’s quarters, along with Kat, which were really little more than cells. Passing a corridor with a black line Phillipa heard people screaming, asking ‘Who am I? Where am I? What am I?’

Asking one of the Empty Men about this she was told this was just the sound of members undergoing the final initiation into the group and that she was never to go there. Phillipa resolved to absolutely go there.

Locked in her cell Phillipa consulted with the holographic Inspector. They realised that the real Inspector could be one of the Empty Men or possibly in the cells. They began wondering how they were going to get out, the Inspector bemoaning that the Time Lords hadn’t provided him with a holographic sonic screwdriver, when the door opened on its own.

Suspecting they’d been aided by the real Inspector Phillipa emerged, following the black line. She hid as two Empty Men exited a filing room, looking over Phillipa’s responses to the interviews, exclaiming that they’d never seen results like it.

Sneaking into the filing room Phillipa found records and recordings of the interviews. She was unable to find the Inspector’s interview, since she didn’t know what name he would have given, she was directed by the hologram of her companion to look at the recordings.

She looked through several and found that each response were the same. Perplexed they theorised that their memories were artificial, maybe implanted. She was unsure what this would achieve.

Pushing deeper into the complex she ignored the locked cells for the moment and found the room of the Leader, his Empty Men plotting the strike of the school bus. The subject of Phillipa’s interview was brought up and the Leader suggested that she was chosen one whose arrival had been prophesied. He ordered that she be brought before him.

Phillipa was forced to rush back to her cell, just in time for two Empty Men with angry masks to escort her to met the Leader. Her mission was put before her and she accepted, receiving an explosive that she was to place on the school bus as it stopped at traffic lights.

Returned to her cell Phillipa was able to remove the outer shell of the explosive. The technology was far beyond her understanding but with the holographic Inspector (and quite a few story points) she was able to deactivate the timer on the device, although as she’d received a ‘Yes but’ result she was unsure how stable it was.

The early next morning Phillipa was whisked by hover car to the heart of the colony, positioned at a busy junction. The Empty Men warned her that she would be watched and she was left to wait for the school bus.

Time crept by but eventually the school bus pulled up at the traffic lights. Phillipa pressed the explosive against the side of the vehicle as she passed, magnetic pads allowing it to cling to the bus.

On the other side of the bus she watched the bus pull away, praying that it wouldn’t go off. That the children wouldn’t die because of her actions. For a moment it seemed to have worked, the bus driving into the distance and around a street corner.

Then there was a sickening explosion. The screaming started soon after.

Horrified Phillipa couldn’t help but run to see what had happened. The bus was nothing but burning wreckage. From out of the flames stumbled a child on fire, walking towards Phillipa, its arms out stretched as it wailed.

This scene turned the players stomachs as I described the child’s eye falling out, it skin melting and the strong smell of plastic. They first sighed with relief as I explained they could see the child was a robot but then immediately became confused. What was going on?