“This time there will be a reckoning with the nameless Doctor whose power is so secret. For I have found his secret out.”

The all-powerful trickster god the Doctor became must have its origins in his 7th incarnation. Once he had Ace by his side he became a schemer, putting plans in motion to take down cosmic entities.

It was the 7th Doctor who destroyed the primal force of evil known as Fenric, banished the gods of Ragnarok and toppled corrupt governments. The TARDIS travelled with purpose, the Doctor setting his sights on opponents that were more powerful than ever.

One wonders if the experiences of ‘Trial of the Time Lord’ gave him the motivation to set his sights so much higher. Had he come to the realisation that the more powerful an entity was the more evil they were?

Ace is an example of how the Doctor first began changing his companions into weapons. Armed with explosives Ace certainly didn’t shy away from a fight, even taking down a Dalek with a baseball bat.

She was the Doctor’s project. He trained her to spot trouble, to think tactically and used time travel to make her confront the demons from her past. She was pawn in his game against Fenric and in order to save her he had to manipulate her.

Ace wasn’t the only one that the Doctor manipulated. With nothing but his personality the Doctor could assume control within minutes, taking over a military operation or persuading a sniper to drop his weapon. In ‘Battlefield’ he even goes one step further, using mind control to calm down an angry bystander.

This wasn’t the only astonishing ability he displayed. The 7th Doctor was almost magical, able to make objects vanish, teleport short distances and heal with a touch. There were frequent hints that he was much more than a mere Time Lord. No longer was the Doctor a person. He was mystery, the extent and range of his abilities hidden in shadows.

Although he still admonished Ace for carrying explosives it was clear he knew that she still carried supplies of home-brewed Nitro-9. If he wanted to he could have made sure that she didn’t have a weapon but it suited him to have them to hand.

This Doctor set in motion a plan to destroy the Dalek home world. He eased his conscience by having them pull the trigger but it was he who programmed the Hand of Omega to destroy Skaro’s sun and provoked them into activating it.

The Virgin books went even further with their portrayal of the Doctor. He would manipulate people into sacrificing their lives, eradicate whole time lines and trick his companions, all in the name of the greater god.

It is no coincidence that many of the writers for the new series of Doctor Who, including Russell T Davies, also wrote books for this Doctor. It can hardly be a surprise that some elements of the Doctor being portrayed as a mythical figure were used for the 9th & 10th Doctor.

This was a Doctor who would have stopped an alien invasion by destroying the alien’s sun and persuading the crew to turn on their commanding officers before the first attack. This was the Doctor whose name was used to frighten Dalek children. 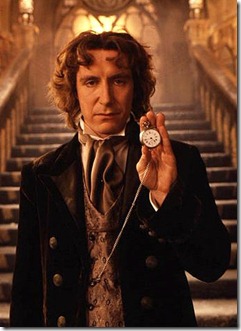 In stark contrast to the secrecy of the 7th Doctor the 8th Doctor was apparently much more open with his companions. He succeeded because of his seemly endlessly optimistic outlook to life.

With only one televised adventure much of what we know about the 8th Doctor has to be taken from the books and audios. Without this information we have only references made by the 9th and 10th Doctor to know what he did but that doesn’t tell us about his character or his methods.

The BBC Doctor Who books continued to portray the Doctor as an important figure in the universe. Beings from across the universe competed to gain ownership of his corpse in ‘Alien Bodies’, Faction Paradox wanted him as a member and he might even have been their leader in the form of Grandfather Paradox. ‘Interference’ gave him a diverging time line when the 3rd Doctor died earlier than he should have and in ‘Unnatural History’ we find that the Doctor has multiple pasts and futures.

This version of the 8th Doctor was an anomaly, able to do anything. He was also the first Doctor to destroy Gallifrey. In ‘Ancestor Cell’ the Doctor condemns his planet to save the universe.

A terrible thing to have to do but he was spared the anguish by having his memories removed. He spent a century on Earth re-learning who he was. For those who hold this as canon it is easy to assume that at some point his memories were restored but we can’t be sure how his experiences shaped his behaviour.

Regardless, in a universe without Gallifrey, the Doctor was the sole protector of time. He came into conflict with Sabbath, an Earth man with his own ideas about how to do the job. While the Doctor tried to find solutions that prevent the loss of life Sabbath was ruthlessly efficient. Did these conflicts make the Doctor question his own methods?

Meanwhile the Big Finish audios presented a Doctor whose passion for life outweighed the protection of time. His sheltering of Charley, a young woman who should have died, put him at odds with the Time Lords and threatened the universe.

This 8th Doctor would seem to have been shaped by his first adventure in San Francisco. Not only did he bring the dead back to life that night but he turned back time. He’d seen first hand that time could be changed to save lives.

All signs indicate that it was the 8th Doctor who was involved in the Time War and was responsible for the death of both the Time Lords and Daleks. His later incarnations speak with regret about what he had to do and one can’t help think how much harder this would have been on the generally positive 8th Doctor.

Did the 8th Doctor loose hope during the conflict? Did he wonder if his previous incarnation would have been more suited to dealing with the terrible sacrifices that had to be made?

Which brings us up to the new series. It was clear that the Time War had a big impact on the Doctor and would shape his next incarnations.

This entry was posted in 7th Doctor, 8th Doctor. Bookmark the permalink.

4 Responses to “This time there will be a reckoning with the nameless Doctor whose power is so secret. For I have found his secret out.”