“People don’t understand time. It’s not what you think it is.” 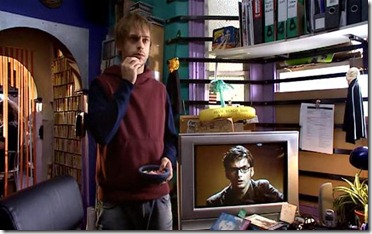 ‘Blink’ reinforces my belief that time is mostly predestined. Consider that Kathy Nightingale’s grandson rings the door bell before she is sent back in time. When the Weeping Angels do send her into the past they aren’t changing history.

There is no greater evidence of this predestination than the conversation that Sally has with the recording of the Doctor. She did choose what she was going to say, uninfluenced by the transcript but there was no chance that she’d say anything other than those words. Those events were locked in place.

What then of the Weeping Angels? By this logic their choice of victim was already as set in stone as they appear. They have to do what they do in order for the universe to make sense.

The Doctor says that they feed on potential energy. When they send a victim into the past they feast on the days that could have been. This suggests that while people are unknowingly carrying out predetermined actions they still have the potential of doing something else.

Is it this potential energy that could give birth to other dimensions? Would the same energy be released if someone died of natural causes? There very well could be other species that could derive substance from this energy.

There is a suggestion within fandom that Time Lords have a special immunity to the effects of time. For evidence of this witness the Doctor and Romana’s awareness of the time glitch that engulfs Paris in ‘City of Death’ and the lack of an alternative Doctor in the world where Roses’ father lived or in ‘Inferno’. It could be that Time Lords lack this potential energy.

This could be because while most people are locked into their actions, thus capping their potential energy, a Time Lord has more freedom. This is why the Doctor and Romana are able to escape their time loop in Megalos. Even with events repeating they have the ability to influence when they are occur, breaking the pattern.

In game this gives Time Lord player characters a certain amount of invulnerability to temporal hazards. It is conceivable that they could extend this gift to their travelling companions, as they do their gift of translation.

The Doctor still gets caught up in the pre-determined events. How galling for him to learn that he’ll be tapped in the 60s and that he’ll be forced to parrot. The one trap that he can’t escape.

When time becomes recursive, the actions happening because that is the way they happened before, logic begins to break down. You can see that there is an echo of formulated plan but then you realise that the only reason that anything has happened is because those involved knew that is what had to happen.

For example the Doctor has his easter egg messages placed on 17 dvds, the dvds that Sally Sparrow owned. The obvious explanation for this is that the Doctor was trying to get Sally to see the message and was increasing his chances by specifically targeting her collection.

Except this isn’t the case. Sally didn’t find the messages on her own, it took the guidance of Larry to know they even existed. The Doctor chose those dvds just because they were on the list that Sally gave him in 2008.

It could be argued that choice of dvds are important because it gives Sally further proof that these strange occurrences are specific to her in some way. The significance is an illusion. She would just as easily have received the message if Larry’s dvd collection had been targeted.

Again this is the logical reason for putting it on 17 dvds but if the Doctor had been given a list with just one dvd title on it he would still know with a 100% certainty that Sally would have seen it, because that was what the list said.

In the Virigin published Doctor Who book ‘Happy Endings’ a musician has travelled to the future and listens to one of his albums, transcribing the words so he can return to the past and record them. The question arises where the thoughts and sentiments of the song originated from and it is suggested that time itself uses these loops to impart information.

Time loops can seem like echoes, remnants of plans made in previous time lines. When using circular time in your own games. It can seem as if there is an intelligence guiding them, giving them the tools they need to escape. Whether the player characters believe that this is time helping them or the result of their own future actions is up to them.

At the end of ‘Blink’, as the Doctor realises that Sally is part of his future, he explains that when you’re a time traveller life can happen in the wrong order, a theme which is further explored when he meets River Song.

You can exploit this in your own games, encountering friends and enemies in a jumbled sequence of effects. The first time they meet an enemy could already have had several encounters with the player characters and only later do the time travellers encounter them for the first time from the enemies perspective.

You could even have the player character defeat an opponent once and for all only to meet them at an earlier point in their lives in a subsequent adventure. In this fashion no enemy can truly be gone for good.

To avoid trapping the player characters in simply carrying out actions they’ve been told they do they should get the bare minimum of information about any ‘past’ encounters. It is enough that know if they defeated an opponent and perhaps where the events took place without knowing how they did it.

You can also take a hint from the dvd messages the Doctor records. Out of context his comments are cryptic and only later do they make sense. You can tantalise the player characters at hints of their future, words that they only realise the significance of when those events are actually occurring to them.

This entry was posted in 10th Doctor, Blink. Bookmark the permalink.