“What’s this, attack of the old people?” 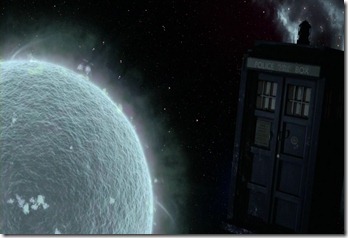 Each of the scenarios presented to the Doctor and his companions in ‘Amy’s Choice’ are reminiscent of adventures the Doctor has experienced before. In fact the situation in Leadworth is so familiar the Doctor immediately sees through Mrs Poggit’s nice old lady act.

The situation in the TARDIS is much like ‘Edge of Destruction’. The time vessel has stopped working and the crew face imminent death. There is a further complication in this situation, as the heating has turned off and they’ll freeze to death before they crash into the frozen sun.

By act 3 the interior of the TARDIS is covered in a layer of snow and ice, drastically changing its appearance. The cosy comfort of the interior has been removed and replaced by something which is quite literally chilling.

These scenes in the TARDIS has a sense of hopelessness about them. There is never any real indication that the Doctor could get them out of this particular peril. The time ship isn’t responding to his commands and every single function has failed.

Of course this is because these scenes are also a nightmare scenario engineered by the Dream Lord. In the real world the outcome might have been very different, probably consisting of the Doctor finding some improbable way to reactivate the ship moments before they crashed.

There are times when you will want to present bleak scenarios to the player characters. No matter how high they roll on their dice or how many story points they spend they can’t save themselves.

The aim of such scenes is not to ultimately kill off all the characters but remind them that their lives are fragile. A twist of fate can see them die without the universe noticing. That is if they weren’t the main characters of your stories.

You’ll find that escaping from certain death can really motivate player characters and when presented with an alternative they will accept it gladly. When done correctly it can make the player characters feel as if they were proactive, grabbing the chance to live no matter what the cost.

The cold star is impossible but the Doctor isn’t sure that it isn’t real. After all he doesn’t know everything. Even a time lord as old as him hasn’t seen everything that there is to see.

This piece of information is handy when dealing with player characters who like to make knowledge rolls to see if they know things about everything they encounter. There can be gaps in what has been discovered, leaving some things total mysteries. 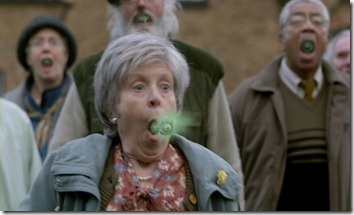 In Leadworth  the Doctor faces the Eknodines, an alien race living within human hosts. The Doctor knows of the Eknodines, describing them as an ancient and proud race, so they’ll real enough to be used in your own adventures.

The Doctor says they are hiding away but it isn’t clear if he means hiding in the old people’s bodies or on Earth. It could be that the Eknodine inhabit host bodies on their own world, providing the same longevity they offer the pensioners. There is also the possibility that this is a recent adaption.

Not only do they offer their host a longer life but they can also increase their strength, allowing Mr Nainby to pick Rory up and throw him. This puts their strength attribute into the 6 to 8 range.

What it doesn’t do is give them great agility. They still move at a slow pace and in some cases still use walking frames. There is apparently a limit to how healthy they can keep the host before aging takes its toll.

The reason the Ekondine give for their presence on Earth is that a neighbouring world drove them out. They been living within the host bodies for years, how long is never stated, but have now decided to humble and destroy Earth in a form of revenge for what happened to them.

The Doctor describes this is as credible, meaning that this can be used as motivation for your own villains. The ramifications of an invasion on an alien world impacting Earth does has the benefit of connecting the universe together. Actions on one world can have far reaching consequences.

Doctor Who has a long tradition of taking every day things and making them frightening. From shop dummies to scarecrows to stone statues player characters should never let their guard down.

In this story it is old people that become frightening and again it because it is the contrast of the ordinary and the extraordinary. We don’t expect old people to be able to kill us  or display great strength. In many ways this makes them more frightening than an ogron. We expect an ape like creature to be strong, not a little old lady.

The Ekondine breath weapon clearly does lethal damage. If caught in a blast the victim rapidly disintegrates into a pile of dust. This is compensated by the relative ease that the Doctor, Amy and Rory display in leaping away from the weapon and its short range.

It does show that lethal weapons are excellent for showing that an opponent is a threat. It shows that you can’t engage in a prolonged toe to toe exchange, whether it is fighting or talking to them.

They also show that great numbers can be intimidating. It doesn’t take long for them to attack most of the village. This leads to one of my favourite scenes in the episode, the Doctor driving around in a van, saving random people from the Ekondine. 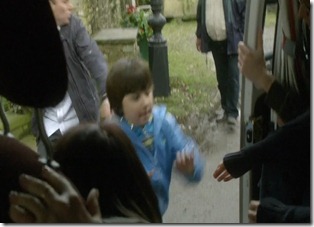 In most episodes the Doctor is shown to rescue his companions or named NPCs. Threats to the public are often shown in broadstroke, to emphasis the scale of the threat but the Doctor usually concentrates on dealing with the root of the problem rather than the results. In this case he is taking time to get people off the street, rescuing people who we only know would be dead without him.

Remembering that innocent people are in trouble and the player characters can save them serves several purposes. It gives them a chance to be heroic and earn story points, allows them to do something other than tackle the villain directly, gives depth to what is happening and provides you with story hooks provided by the people they rescue.

Due to the nature of the story both these scenarios end abruptly. Amy and the Doctor commit suicide because Rory died and upon waking in the TARDIS the Doctor also blows the ship up.

Which leaves the question. If the player characters were in those scenarios, whether it be crashing into a star or dealing with homicidal old folk, what would they do?

This entry was posted in 11th Doctor, Amy's Choice. Bookmark the permalink.

1 Response to “What’s this, attack of the old people?”