“Have you heard of time standing still?”

At the centre of the story of ‘Enlightenment’ is the race between the Eternals. Such competitions come with built in tension. There can only be one winner and so every success and failure effects the outcome.

In this story the Doctor and his companions aren’t active participants of the race, merely guests on one of the ships. The Doctor comes to the conclusion that none of those taking part should win as they are powerful enough without the power the prize is supposed to bestow.

In your own adventures the player characters might actually be contestants in a similar race or challenge. The prize might be something that they would dearly like to possess or they could do it on behalf of someone else.

Such competitions are more than simply making task checks. Like a quest much of what makes a competition interesting are the obstacles that are encountered on the way and how they react to them.

Using ‘Enlightenment’ as an example there several choices we see the eternals making during the race. They decide how close to pass to a planet, balancing the risk of passing close to its gravitational field against the time lost if they plot a course around it. They make a decision to fly through an asteroid belt and they decide against turning back to rescue Turlough and thus lose more time.

When plotting an adventure similar decision points should be made. The choice is usually between being safe but losing time or taking a risk and gain time but face disaster should they fail to meet the challenge.

There should be enough decision points that player characters can play half the choices safe. This should give them enough leeway to avoid danger when they want to without feeling that they will lose the race while also encouraging them to take a risk now and again to increase their chances.

Depending on the number of other competitors you may decide what choices they will make ahead of time, including the outcome. This saves you time and lets you establish the pacing and tension of the adventure. You can illustrate the outcome of choices by having one competitor always take the safe choice and fall behind while another competitor could be a dare devil but ultimately run out of luck and end up being destroyed.

If there are only a few competitors or if there are only a small number who are important you can decide to make their task checks there and then. This can give the player characters a feeling that there is an element of chance and that even you haven’t decided the outcome of the race.

Their personalities will suggest what choices they make during the competition. The way they behave may lead to the player characters admiring or hating them. If the player characters are able to predict a rivals behaviour it could even give them an advantage, for example knowing that another competitor will take the long way round an obstacle rather than risk using a short cut.

Breaks during the competition can let the player characters get to know the other people taking part. The social gathering in episode 3 of ‘Enlightenment’ is a demonstration of this, allowing the Doctor and his companions to meet the crew of the other ship, face to face.

It also in this third episode that they meet Captain Wrack and put the clues together that show she has been responsible for the destruction of two of the eternal ships, handily solving that mystery.

When your adventure isn’t focused on investigation or mysteries this can be a quick way to establish a villain. Simply have bad things happen and when you introduce the person behind it just make sure that the player characters are aware that they were responsible. They immediately know that person is evil and why they must be stopped.

Introducing such a character just after the mid point of your adventure allows just enough time for the player characters to take this on board and let them take action against them, feeling some satisfaction from their defeat.

Such abbreviated encounters work well for a competition because the real climax is the conclusion of the challenge. The most important thing is who the winner will be. If the player characters are taking part they would most likely want this to be them but this can change.

During the competition they might befriend another competitor and see that they are actually more deserving of being the winner. They could also learn that the prize isn’t what it first seemed and try to avoid coming first.

The twist in ‘Enlightenment’ is that the Doctor and Turlough are the unexpected winners of the prize when they pilot Captain Wrack’s ship across the finish line. You can plot these sort of plot developments in advance or ensure that the player characters are aware of plot holes that they can take advantage of. 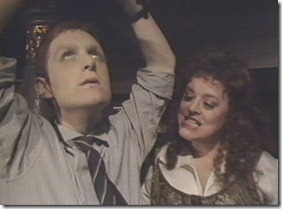 This adventure offers an idea of how to deal with catastrophic failure. At the end of episode 2 Turlough is lost over board, floating in space with very little oxygen. Despite the pleas of the Doctor and Tegan the Eternals refuse to turn back to save him.

Rather than declare that Turlough is now dead the writer has him taken on board by Captain Wrack’s ship, the Buccaneer. Instead of seeming like a plot cop-out we learn that he might actually have been better off dying in space as he is imprisoned and threatened with torture.

You can use similar tactics in your own game. When a character has doomed himself you can have fate save them but still put them at peril. To the player characters they are still in danger but you’ve delayed the outcome, giving all involved time to rescue them.

This entry was posted in 5th Doctor, Enlightenment. Bookmark the permalink.