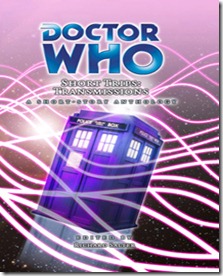 Short stories are excellent places to find new ideas. They provide little slices of Doctor Who that you can’t find in the television series or the audios. While there are plenty of adventures in the Big Finish Short Trip collections there are also quieter stories, looking at what happens to the Doctor between saving the world.

One such story is ‘Only Connect’ by Andy Lane, published in Short Trips: Transmissions. The story centres on James Willaker, a city planner who finds his taxi driver is actually a time traveller called John Smith.

It seems that the Fourth Doctor likes to spend time in different decades, in different cities, ferrying people about in a taxi for the sole purpose of picking up bits of trivia that might prove useful to him in the future.

The argument put forward by the Doctor and the story is that history isn’t made up of dry facts and figures but of people who lived it.  He recounts meeting a Ray Buduick, a civilian who was the first person to engage the Japanese at Pearl Harbour. To the Doctor he is important historical character as President Eisenhower.

This is is a fascinating approach to designing an adventure around historical events. Rather than focusing on the main players you instead bring the common people caught up in events to the fore.

The benefit of this is two fold. Plot wise it puts distance between the big figures and the player characters, avoiding the question of how much the time travellers will influence them and future events. Secondly having the player characters interact with the average person grounds the adventure in reality, making the danger more real at the same time.

Ray Buduick might not have influenced events but he certainly took part in them. Rather than having the NPCs simply being onlookers you can have them actively reacting to what is occurring.

For example a woman might risk her life to save her child from a burning building during the Fire of London, a man attempts to cross battle lines during the Civil War to get home to his family or a young boy tries to prevent his favourite HG Wells book being burned in Nazi Germany.

The thrust of the story is that people provide the Doctor with useful information. In this case James Willaker gives the Doctor some valuable information about Chase Hall that the readers knows will be useful to him in ‘Seeds of Doom’.

If you plan your adventures in advance this can be a clever way to foreshadow events and give the players clues before the adventure starts. It might not even mean anything to them at the time only to find it helpful in the heat of the moment.

A tour guide showing the characters the location of secret passages in the ruins of an English castle can provoke invaluable to them when they travel back in time and end up in the dungeon.

These little tit-bits can also provide the excuse the players need to spend story points and ‘reveal’ information they’ve picked up in their travels, either to get a clue to move them in the right direction or to bend the plot.

Whole adventures could be centred around this information gathering. The Doctor indicates that quite a few taxi drivers are time travellers because it is a great opportunity to chat to a diverse group of people so your player characters might follow this example.

They could also try their hands at hair dressing, journalism, bar tending or any other occupation where small talk is part of the job. Not only would it be interesting to see if the eccentric time lord or the 11th century viking can hold down a job it is a change of pace to hurtling through time and space.

You still have the option of placing the player characters in different times and places but you can also establish a new scenario. Rather than being travelling strangers who only met the NPCs during the adventure you could start a game with the player characters already undercover in their new jobs.

One of the pieces of trivia the Doctor reveals he has collected relates to an underground community living beneath the streets of New York. A police man told him that some members of this subterranean civilisation have never returned to the surface, turning into blind albinos.

This piece of information is a great starting point of an adventure. Is this underground society a threat to the surface? If someone was preying upon them would it be up to the player characters to help them? What kind of civilisation  would develop in the dark?

In revealing that he is a time traveller the Doctor discusses the nature of time. He explains that the smallest measure of time is a ‘moment’. It is possible to change a moment but when you stop doing this the next moment is the same as the one that occurred originally and the one after that.

This explains why the Doctor can talk to James about being a time traveller. When the Doctor leaves James’s life will go on just as it did before without affecting history. Following this theory we are left with a much more robust picture of time.

The player characters don’t have to worry about unintentional ‘Butterfly effects’ where one accidental change can have huge repercussions.  It would take drastic alterations to these ‘moments’ to cause any permanent divergence of history.

Eventually time rolls on and history forget the people who lived through it but that doesn’t mean that the player characters have to.

This entry was posted in 4th Doctor, Big Finish. Bookmark the permalink.