We hope to return to the North Way, carrying home the oriental treasures from the Silk Lands in the east, but the dark curse follows our dragonship.

‘The Curse of Fenric’ by Ian Briggs has several similarities to ‘The Talons of Weng-Chiang’. Both are historical adventures, both concern supernatural occurrences and both  feature opponents from the future.

The tone of the stories are dramatically different. ‘The Talons of Weng-Chiang’ was a investigation, the Doctor and Leela following the trail of the clues, ever moving towards the villain and getting into all kinds of trouble along the way.

In contrast ‘The Curse of Fenric’ is slower paced. There is a brooding menace, the feeling that there is great evil just beneath the surface like undercurrents. The threat is subtle at first, attacking under the cover of unnatural mist and leaving broken minds and bodies drained of blood in its wake.

This slower pace is useful in what is essentially a ‘base under siege’ story. During the opening scenes you can establish the nature of the base, the resources available and the people who will be trapped.

Bases under siege stories are common in Doctor Who. The main characters arrive at a location, often isolated, and find themselves trapped when the base comes under attack. This threat is usually external, something trying to break in, but it can include stealthy opponents, striking from within.

In ‘The Curse of Fenric’ the base is an actually military base. The Fenric of the title is an ancient evil who uses his vampire like haemovores to attack their defences, hoping to use the store of poison to choke the earth.

There is an added complication. The head of the base, Commander Milton, had deliberately weakened the base’s defensives  in order to set a trap for Russian soldiers. This makes them even more vulnerable when the attack occurs.

In the first few episodes the Doctor and Ace familiarise themselves with those at the base, visit the church where they learn some of the background of the Viking curse and  encounter the Russians on the beach.

Fenric’s presence is kept to a minimum. The Viking inscription gives an idea of his power, a dark curse that has brought death throughout history. It establishes that threat is ancient and evil but the details are kept vague. Introducing a villain in this manner builds anticipation. The players imagination will run wild, ensuring that they are frightened of the villain even before he makes an appearance.

It became something of a character trait that the 7th Doctor was an enigmatic player of games. This adventure opens with him deliberately piloting the TARDIS to the base but it isn’t until towards the end of the story we actually know what his agenda is.

This can be difficult to replicate in a game unless the Time Lord is an Non Player Character. You may accept requests from your players, allowing you time to write an appropriate adventure. For example they might ask to face off against the Sontarans or request a trip to the 13th century. The problem with this is it eliminates any suspense or surprise.

An alternative, if you have a player run Time Lord who wants to have a hidden agenda, is provide them with written notes. In these notes you can give an indication of where and when the adventure will be set and a general idea of the threat they’ll face. The Time Lord can then decide how much to reveal to his companions.

The key is that the Time Lord won’t know everything. Using this story as an example the Doctor knows that Fenric is located somewhere in the area and the details about the base, as he is familiar with the staff from the moment he arrives. He also knows that he has visited a potential future where the poison being collected by the base is used to kill the planet and that the Viking runes will set in motion the events that will free Fenric is run through the cypher machine.

What the Doctor doesn’t know is where exactly Fenric is and the actually events that will occur at the base that led to the future he visited. Upon arriving at the base he has to work out the agendas of those at the base, knowing that Fenric will be making an appearance soon.

This puts the player character in a strong position, determining what they tell others. Some might tell their fellow players everything, but there are reasons not to. Giving them too much information might be too frightening such as in this adventure where Fenric is a primal force of evil. No point in worrying them if they can stop the evil from arising.

Information can also be dangerous. Knowing that the runes are a cypher could lead to someone breaking the code and unleashing Fenric. This backfires because Ace works this out any way but in the normal course of events a player character can be justified in keeping certain details to themselves. 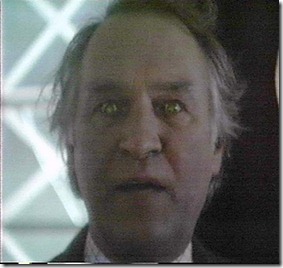 Much of the fear in this story comes from the curse. Events in the past can establish a pattern, a sense of inevitability. Over hundreds of years people have died, legends have grown up about Maiden’s Point and even the church looks more like a fortress, like the local were expecting a battle.

This is further intensified by events in the present paralleling the past. The Doctor points this out by comparing the Viking passage about using the North Way with the Russian instructions indicating they will travel back via Norway, the North way.

Establishing that this has happened before makes the player characters think that it will happen again. Their attempts to avert disaster will seem that much more of a struggle. Their opposition doesn’t just come in the form of a physical opponent but in the intangible form of fate and destiny.

Breaking this pattern is the only way to defeat this curse. The player characters must prevent the chain of events from reaching their final conclusion. The more they know of the curse the better chance they have of identifying what key point they need to alter.

In a game about time travel this seems fitting.

This entry was posted in 7th Doctor, Curse of Fenric. Bookmark the permalink.

1 Response to We hope to return to the North Way, carrying home the oriental treasures from the Silk Lands in the east, but the dark curse follows our dragonship.