“I know that free movement in time and space is a scientific dream I don’t expect to find solved in a junkyard.” 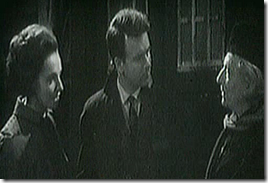 Doctor Who: Adventures in Time and Space is a good system to model the television series, especially as it can easily model social conflicts. ‘Unearthly Child’ doesn’t provide much in way of fights but it does provide some good examples of how two characters at odds can create tension and excitement.

In this case Ian and Barbara want the Doctor to admit that Susan is in the yard, while the Doctor is keen for them to leave, so he can enter the TARDIS. The Doctor does a good job at bluffing, even when Ian threatens to call a police officer the Doctor is quite happy for him to do so, most likely planning to escape in his time machine the moment the two teachers leave.

The system can handle this battle of wits. Any damage done would likely be targeted against the Resolve attribute. The teachers are already unsure whether they should really be pursuing one of their students and have been unable to locate her in the yard. After a few exchanges it’s easy to imagine that Ian’s resolve has been reduced and he is wondering whether it is worth continuing the argument and likely having his Resolve reduced to 0.

It is here that a story point comes into play.  They can be used to give the player characters push in the right direction. In this case Ian spends a point and the kind games master has Susan call out for her Grandfather from the depths of the TARDIS, leaving no doubt about where she is hidden.

This demonstrates that you don’t need to throw the player characters into fight after fight to create an exciting session. Just dealing with NPCs who want to stop them from achieving their goal or covering up the truth can be all the challenge they need.

Later the Doctor starts to pilot the TARDIS, abducting the teachers before they can tell anyone. Susan realises what he is doing and attempts to stop him. Presumably it is this interruption that causes everyone to pass out as the time ship takes off.

Such a turn of events can be nicely modelled with the lowest level of success, the ‘Yes, but’ result. In this situation the but is ‘but you all pass out’. The Doctor achieved his goal but in passing out looses the upper hand.

This unusual function of the TARDIS is something that the player characters might want to replicate themselves, especially if their time ship is hijacked. It could also be a good way to start a game, having the player characters waking up after a failed piloting check, their ship having landed in some strange time and place.

Just why does this occur? There are multiple explanations, all which could prove useful during play. The simplest reason is that it is a simple malfunction of the machinery. The Doctor had already electrified the console so it isn’t a huge stretch of the imagination that this energy was accidently released in a burst, stunning everyone in the room.

It could be due to telepathic link that a TARDIS establishes with those inside. Establishing a link to provide instant translation might take some time and the sudden take off interrupted this process, causing a backlash.

Another possible explanation is the very thing that is the focus of the scenes within the TARDIS, the discovery of new ideas and concepts. From the moment Ian steps into the TARDIS he struggles to understand how such a thing is possible while the Doctor berates him for being unable to comprehend what would be literally child’s play for his people.

Just the idea of time travel is too much for Ian and Barbara so the shock of actually being wrenched from ones native time may very well knock them out. Similarly the Doctor and Susan have lived in 1960s London for several months. It may very well be that their minds have adjusted to living one day after the other and experience a similar disturbance due to their sudden departure.

This can add an interesting wrinkle to the life of  time traveller. Stay in one place too long and your next trip in the TARDIS might be an uncomfortable one. The equivalent of suffering the bends when coming to the surface of the ocean too quickly. The Zero room, as well as being useful regenerating time lords, might serve to prepare people for trips or at least lessen the effects.

It is by pondering these questions that we open ourselves to new ideas and concepts. You never know where you might find solutions to the problems of the universe.

This entry was posted in 1st Doctor, Doctor Who. Bookmark the permalink.